When does an ‘angry’ email constitute workplace bullying?

Harassment with remote work can be 'more subtle,' says lawyer 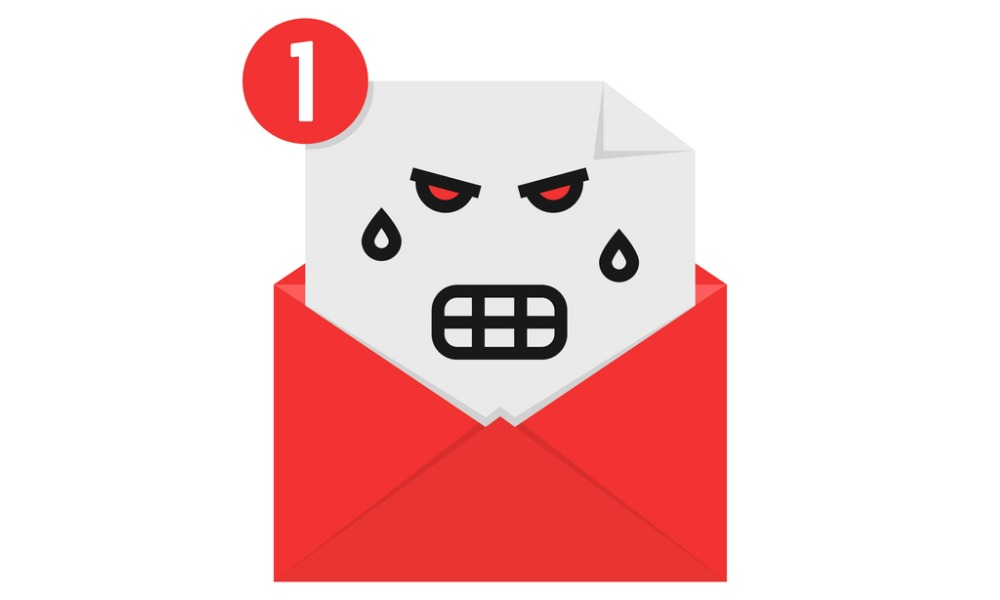 Whether it’s a toxic message or an in-person verbal attack, harassment is harassment, according to Mike MacLellan, partner at CCP.

However, employers have to work that much harder in hybrid settings to get to the crux of the issue and decide on how to act.

“If it would be classified as bullying when it happens in person, it can be bullying if it happens via text or email. It’s the same standard as in-person conduct,” he says.

“When we're talking about bullying, a workplace may have their own definition in the form of violence and harassment policies. However, we do have a more standard definition of workplace harassment which is generally defined as a course of a vexatious comment or conduct against a worker in a workplace that is known or ought reasonably to be known to be unwelcome.”

However, that’s a pretty broad definition. And when it comes to assessing harassment in remote work, the issue becomes even more convoluted.

With more and more people opting to work from home, how people interact with their teams and managers has changed exponentially. As such, employees need to take extra care in how they communicate over emails, messages, and video calls — because what’s considered polite by one could be construed as aggressive by another.

“When it comes to determining if an email is ‘harassing’, employers need to return to the sender. Ask them what the intention behind the message was. Was it supposed to be aggressive? Or is there another explanation?” says MacLellan.

Using the example of voice to text apps, he says some can often miss words or accidentally type in all caps. That’s an explainable accident. However, repeated or obvious offenses could infringe on the world of microaggressions – something that most definitely is bullying.

“For example, using the wrong pronouns or title, that can be pretty demeaning,” he says. “But that’s more seen in-person; in remote harassment, it’s more subtle.”

Any conduct that would be workplace harassment in person doesn't take it outside of that definition just because it's remote, says MacLellan.

“The definition does not have any elements for it being in-person versus offsite. It's just a worker in a workplace. As such, if it's a vexatious comment or conduct towards an employee while they’re working, that's workplace harassment.”

Employers have a “duty to enquire” when it comes to bullying at work – meaning that if you suspect harassment is happening in your workforce you legally have to act on those suspicions.

And feigning ignorance isn’t an excuse.

“Before any allegations arise, employers must update their policies to make sure that they refer to not only harassment but harassment in all its forms, including digital,” says Stuart Rudner, founder of Rudner Law LLP. “This is mandatory in Ontario and many other jurisdictions – so internal reporting mechanisms must be easy to use and up to date.

“Employers have a positive duty to investigate harassment, even if there is no formal complaint, if one of the people involved resigns, or if the complainant does not want them to. An investigation must be fair and impartial. The investigator’s job is to decide, on a balance of probabilities, whether there was harassment or not.

“Failing to investigate properly will expose the organization to liability.”

The cost of poor communication

A Society for Human Resource Management study found that companies with more than 100,000 workers posted an average loss of $62.4 million annually because of poor communication between employees.

“Through effective internal communication, human resources can ensure the right messaging is delivered and minimises any ambiguity,” says Cathy Ngo, HR and communications consultant. “We all have good intentions at heart, however, it can be taken the wrong way if not articulated clearly and at the right time.

“Human resources plays a role in coaching and empowering our leaders to be change champions, and a failure to communicate successfully could land the company in legal trouble. It could also make the company unable to recruit and retain key talent.”