“Have you ever killed anyone?”

Veterans attempting to enter the civilian workforce can be an asset to employers but many say they’re asked inappropriate questions in interviews. 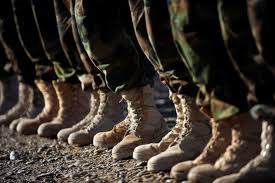 Vet
erans attempting to enter the civilian workforce offer a wide variety of specialist skills but many say employers are overlooking their valuable experience and asking inappropriate questions instead.

According to a study by Barclays Armed Forces Transition Employment and Resettlement (AFTER) programme, 15 per cent of ex-militia applicants have been asked whether or not they had killed anyone during combat.

“It’s concerning to discover that veterans are facing personal and inappropriate questions that have no bearing on the role they are interviewing for and completely undermine their feeling of credibility as a candidate,” said Stuart Tootal, head Barclay’s AFTER program.

“By focusing on unhelpful stereotypes, such as the candidate’s ability to handle a weapon, interviewers are completely overlooking all the transferrable and valuable skills that will play out well in civvy street,” he added.

Veterans face significant challenges when attempting to find civilian work, from writing a CV that resonates outside of a military environment to convincing employers their skills are transferable.

The review found that 23 per cent of former military job seekers felt they were unable to explain their armed forces experience well on a CV or job application, whilst an additional 15 per cent had difficulty articulating how their skills would translate during interview.

Despite the disappointing report, many employers are waking up to the realization that former military personnel are a relatively untapped pool of talent.

Global financial institution EY has publicly expressed its interest in helping veterans find roles within the organization, both to support the former personnel and to source exceptional employees.

“At EY we are focussed on finding top talent, regardless of background, and we recognize that many military personnel have a wealth of skills and leadership qualities that would be invaluable to our business,” said public sector leader Bjorn Conway.

“From their problem-solving abilities and resilience under pressure, to their people management and communication skills,” he added.