HR in the Far North

Living and working in Northern Canada holds unique challenges for HR pros - including convincing candidates they won’t have to live in igloos. 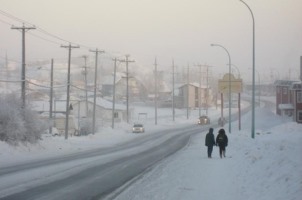 The
uneven skills gap in Canada means while some recruiters have their pick of candidates, others must make do with a shrinking talent pool. Hiring for Yellowknife and the Northwest Territories has added challenges. How can one of Canada’s least-known regions differentiate itself, and what can an HR director learn from its successes in employer branding?

“We’re competing against Canada, but against the world, too. Everyone’s trying to recruit the most qualified people,” Recruitment organization CDETNO’s acting executive director Anne-Christine Boudreau said. “We’re trying to attract people to the NWT to work, visit, live and invest.”

The key message from Boudreau is to play to your strengths – the people attracted to the area are excited about the isolation, opportunity and adventure.

“The people who are coming are typically people who are looking for an adventure,” Boudreau says. “There’s that profile of people who want to try something new, have interesting career advancements.”

Key to any employer branding strategy is addressing concerns, which for CDETNO and other recruiters in the territory, mostly involves correcting misconceptions.

“A lot of people think we don’t have any summers, which is absolutely false. This summer our thermometer at home hit 42 degrees. It’s not long – maybe three months – but I think that’s one of the biggest myths,” Boudreau says.

“Yellowknife looks like a city; we have some high-rise buildings and a lot of services and facilities from multiplexes, gyms and recreational facilities to a farmers’ market, grocery stores, even Walmart and Canadian Tire.”

Many newcomers will stay just a few months or years in the transient city, but there are exceptions. Like many, Boudreau came initially for a five month contract. Three years later she’s running the organization that hired her.
“People you meet tell you ‘I came for a year and it’s been 30 years’. That’s what happened to me, I was here for five months and it’s been three years. It just happened. You stay because it’s a cool place and people like it.”

Boudreau’s story is an example of the career growth opportunities the Northwest Territories are using as a selling point to potential immigrants. What keeps her in Yellowknife are all the factors the territory is using to recruit within Canada and beyond.

“Definitely the job opportunities are really incredible – I started as a consultant and now I’m the acting executive director. There’s also the sense of community and the lifestyle, and for people who like outdoor activities it’s one of the best places to live.”