Mandatory jabs are a divisive subject – especially amongst HR leaders 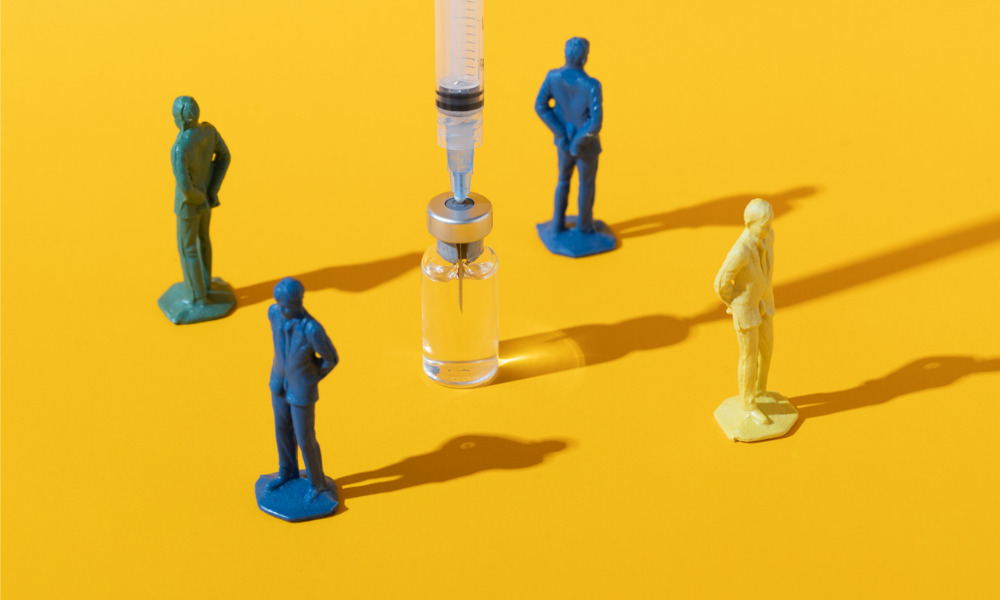 The majority of Canadians support the termination of co-workers who refuse be get vaccinated against COVID-19, a recent poll revealed. The survey from Angus Reid Institute asked employees if they support or oppose termination for various unvaccinated workers, such as on-board airline employees, schoolteachers, police officers, paramedics, firefighters, medical professionals, trades people, and workers of small private businesses.

The results found that the majority of employees supported the termination of unvaccinated on-board airline employees - with 71% agreeing to the move and just 27% opposing it. Most also support the firing of unvaccinated schoolteachers, police officers, paramedics, firefighters, and medical professionals - with 69% supporting their termination and 28% disagreeing with it.

Read more: Workers who resist vaccine mandates may not be eligible for EI, according to feds

Meanwhile, 64% agreed that restaurant employees who refuse to be vaccinated should be fired, while 32% disagreed. A little over half, 55%, said they agree with trades people or construction workers being terminated if they refuse to have the jabs, with only 38% disagreeing with them.

Respondents were also almost divided on the termination of unvaccinated people working for small businesses with less than 10 employees, with 53% agreeing with the move and 41% disagreeing.  Canada mandated all federal workers, including those in federally regulated sectors, to be vaccinated against COVID-19. Failing to do so will place them on unpaid leave. However, some provinces in Canada have refused or dropped their vaccine mandates for healthcare workers amid concerns on staff shortages.

The question of whether or not mandated vaccines are fair and legal has been the issue of the day for the past few months. To glean some insight on what is and what isn’t legally acceptable for employers and employees, HRD spoke to Michael Horvat, partner at Aird & Berlis, who revealed whether or not refusing the vaccine constitutes a ‘frustration of contract’.

“If the employee in question had a supported exception to a mandatory vaccination policy – if they have a bona fide medical reason, for example, for not being able to take the vaccine, and there was no alternative accommodation that could be made for them – then this could be a frustration of contract,” Horvat told HRD. “However, I think there's a big hurdle to overcome as far as the employer is concerned. Essentially, they’d have to be able to demonstrate that being fully vaccinated was a bona fide requirement for the position, and that such policy should or could be imposed over a long period of time.

“It would be difficult to argue that a vaccination is the only answer available to an employer,” added Horvat. “For example, an employee could be subject to regular testing, use an N95 mask or continue remote work. For individuals who simply refuse to take the vaccine on the basis of personal belief – that’s likely not a frustration of contract issue. It would enforcement of a company policy and whether applying that policy would constitute a constructive dismissal or support a dismissal for cause for failing to follow appropriate policy.”

Do you believe unvaccinated workers should be fired? Tell us in the comments.