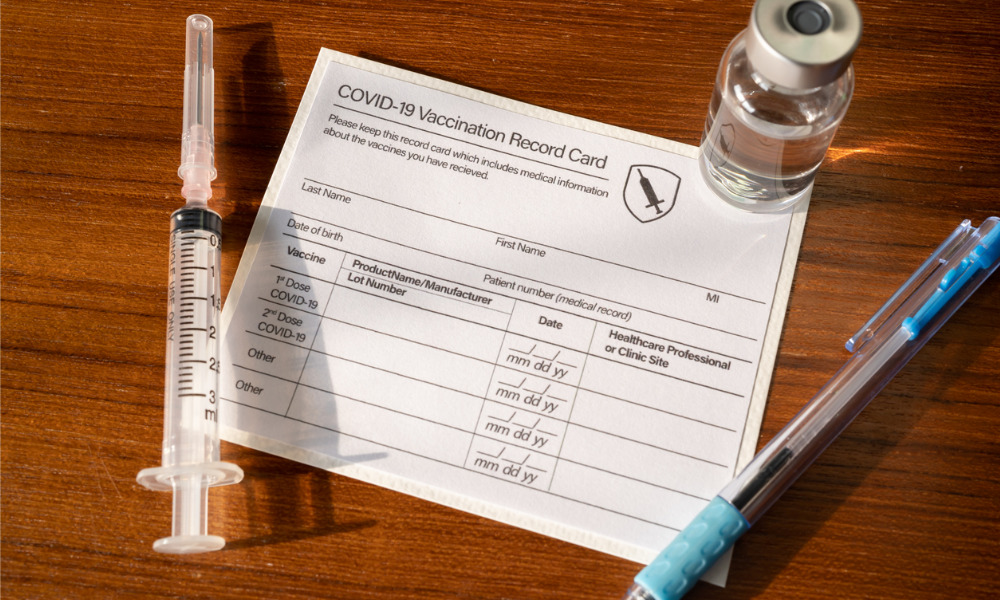 On April 27, 2022, in Canada Post Corporation v. Canadian Union of Postal Workers (Canada Post), Arbitrator Thomas Joliffe, Q.C. dismissed a union grievance disputing that the unilateral imposition of a mandatory vaccination practice (Policy) was a reasonable exercise of management rights and responsibilities under the collective agreement (CA), and was a valid application of an employer’s obligations under the Canada Labour Code (CLC).

The Policy required employees to attest to their vaccination status as fully vaccinated; partially vaccinated and intending to become fully vaccinated; unwilling to be vaccinated; or unable to be vaccinated because they come within a protected ground under the Canadian Human Rights Act, e.g., a medical exemption requiring accommodation.  Employees who failed to complete the attestation by November 26, 2021, would be placed on unpaid leave.  If on unpaid leave for more than 30 days, employees would be required to pay higher biweekly premiums for basic life insurance, disability insurance and extended health care.

While the union’s expert supported a “vaccinate or test” approach over mandatory testing and believed rapid antigen testing (RAT) was an appropriate alternative given the small percentage of unvaccinated employees, the corporation’s expert witness opined that vaccination was crucial and RAT should be used on a complementary basis and not as a replacement.

Arbitrator Joliffe dismissed the grievance finding that the corporation’s Policy was a reasonable exercise of management rights and responsibilities under the CA and pursuant to its CLC obligations, and that the Omicron variant’s emergence did not change this.

Arbitrator Joliffe considered the conflicting expert evidence, and although he acknowledged Omicron’s tendency to break through vaccine protection, he observed that illness following vaccination is less severe; the chance of hospitalization is diminished; and a reduced viral load results in a lower likelihood of transmission.  Furthermore, he emphasized that that RAT has a sensitivity issue with Omicron.

The arbitrator found the following points made by the corporation persuasive:

Arbitrator Joliffe concluded that the corporation’s expert opinion should be preferred and specifically accepted, “that there currently is an absence of evidence that rapid antigen testing reduces transmission in the workplace or anywhere else, although recognizing that it can be a valid complimentary [sic] approach.”  Furthermore, he emphasized that the expert did not believe that even with the higher incidence of breakthrough infections, the Omicron variant decreased the need for vaccination.  Arbitrator Joliffe stated:

…the best evidence suggests that abandoning mandatory vaccination requirements and moving into a testing regime has never been shown to be a better approach to protect the workplace and the Corporation’s employees in dealing with this pandemic, a critical obligation on its part.  I am not persuaded that whatever approaches have recently been espoused by various governmental authorities should not be a determining factor in this matter.

Finally, Arbitrator Joliffe reiterated the seriousness of the corporation’s operational issues noting that, “It has to deal in managing its Postal collection and delivery system with the entire breath of this country,” and stated that since the COVID pandemic had “become hugely disruptive of the Corporation’s operations and unquestionably impacted overall employee safety across its mail processing, collection and delivery system,” the corporation needed to find the most effective approach.

Arbitrator Joliffe’s award in Canada Post is consistent with the many arbitration awards we have written about that support the imposition of vaccine policies in the workplace to reduce the spread of COVID-19, provided the employer complies with its obligation to accommodate employees under human rights legislation. The authority to impose such policies arises from management’s right to implement reasonable rules and regulations under the CA, and from the employer’s duty to take necessary measures to protect the health and safety of workers under applicable legislation.

Like many arbitrators who previously considered mandatory vaccination policies, Arbitrator Joliffe was strongly influenced by expert scientific evidence regarding the efficacy of vaccines relative to RAT, which confirms that despite Omicron’s tendency to break through vaccine protection, vaccination remains the most effective way to reduce COVID transmission, and to reduce its severity and the risk of hospitalization. In his analysis of the reasonableness of the Policy, Arbitrator Jolliffe also followed the same contextual approach as other arbitrators.