There is a long list of sins a worker can commit to earn the ire of their colleagues but what is the top irritant that really hits a nerve among office workers? 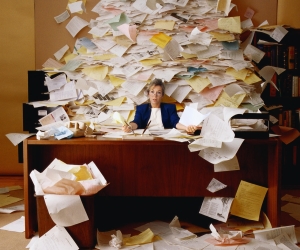 Off
ice gossip and filthy dishes left piled on desks may make workers shake with rage but what really riles staff up is a colleague’s lack of time-keeping.

Nearly two-thirds of managers said they found their colleagues arriving late in the morning or for meetings as ‘their number one irritation’ in a survey by the Institute of Leadership and Management.

Tardiness may be the main irritant but following that up by sending an email to a colleague ‘sitting opposite’ could really see tempers flare as 56% of managers despise those who chose email communication over talking directly.

Management jargon was also among the worst annoyances for office workers, with managers describing it as a ‘pointless irritation’ which few people understand. The most overused jargon, according to the results, are ‘thinking outside the box’, ‘going forward’ and ‘let’s touch base’.

As well as using management speak, colleagues who take regular cigarette breaks, come into work when they are ill and fail to make cups of coffee for other workers fuel the fury of those working alongside them.

Office attire is also an issue with revealing outfits and flip flops a common source of problems.

Charles Elvin, chief executive of the Institute of Leadership & Management, stated: ‘When office-based teams work in close proximity for long periods of time, we see that seemingly trivial issues can grow disproportionately, if left unchecked, and begin to cause upset and resentment.’

“By proactively dealing with potentially divisive issues such as poor timekeeping, untidiness, excessive emails and inappropriate dress, managers can ensure they don’t grow to affect teamwork and morale.”

But it’s not all doom and gloom, there are some acts that brighten the office with birthday cake and free tea and coffee topping the list. Simple gestures also generate warm office fuzzies with respondents stating a ‘thank you’ in return for a favour or job well done means the most along with having teammates who take the time to say ‘hello’ and ‘goodbye’ each day.