Lighter side: Bikini leaves one fraudulent employee with nowhere to hide

An American beauty queen has been exposed for furthering her career at the expense of her employer, after a photo of her clad in a bikini and stilettos left her with nowhere to hide. 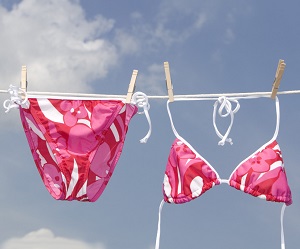 An
American beauty queen has been charged with three counts of insurance fraud after she successfully pulled the wool over the eyes of her employer to further her career.

Shawna Lynn Palmer, 22, approached her employer in California and claimed she could not work at her grocery store job because of a fractured toe.

Palmer consulted a doctor a few days later, who issued her with a pair of crutches and ordered her to keep weight off her injury lest she make it worse.

However, though Palmer was off work for weeks, leaving her employer in the dark, she was discovered to be actually using the time to compete in a series of beauty pageants.

Though claiming to be unable to work, Palmer was spotted at a Long Beach beauty pageant in a pair of skyscraper stiletto heels and a bikini.

Palmer did not try too hard to hide; she even posted a picture of herself on Facebook winning third place in a bikini contest, while wearing a bikini and stilettos.

The Daily Mail reports she went back to the doctor and falsely claimed she had not put any weight on her foot and had not worn shoes.

If Palmer is found guilty she faces a year in jail and up to three years on probation. She will also have to pay back the USD $24,000 claimed.

Byron Tucker, who works with the state's deputy insurance commissioner, told news outlet KTLA: “People might want to say here's a young lady who had beauty and bravado in making these claims, but it really didn't add up on the brains side of it.”