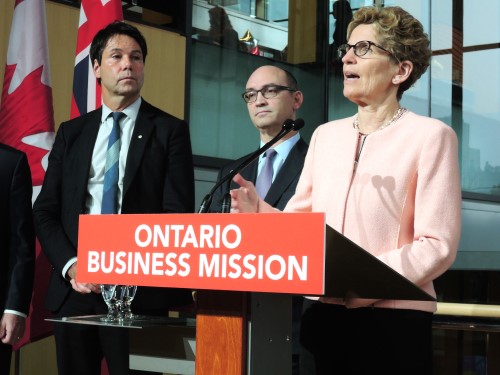 A l
obby group representing tens of thousands of Ontario employers is urging the provincial government to slow its proposed employment reforms, including a minimum wage rise that it warns will harm businesses.

The Keep Ontario Working coalition sent an open letter to Premier Kathleen Wynne on Monday morning asking the government to pull back on the changes, which will hike the minimum wage from the current $11.40 to $14 in January 2018, and $15 in January 2019.

The letter came as the Ontario government began public hearings on the law change on Monday.

Keep Ontario Working - which represents the hospitality, tourism, primary industries, real estate and retail sectors, among others - said local businesses may have to shutter, due to the rushed pace of the reforms.

“Many Ontario employers, especially small businesses, are now considering closing their business
because they do not have the capacity to successfully manage such reforms,” it wrote in the letter.

“To plan effectively and protect jobs, employers need predictability and time to adjust the cost
of other inputs where we can.

“There is no way to absorb and adjust to a 32 per cent hit in less than 18 months, the bulk of which is an even more unmanageable 23 per cent increase a mere seven months out.”

However, indexing wage rises to the consumer price index, with an additional percentage increase in wages “over the course of a few years” would be a more acceptable option.

Wynne’s office did not immediately respond to a request for comment.

"If there's more work to be done in terms of the details and potential unintended consequences, that's something we're certainly happy to do with our business community."

Keep Ontario Working has commissioned its own economic impact analysis of the reforms, which it plans to release in August.


Related stories:
Why a higher minimum wage could be bad for workers
Ontario employers “appalled” by minimum wage