Sadly, it’s a common element in many organizations but one top academic says HR can train their employees to adapt. 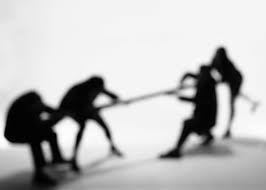 Whe
n organizations talk about their culture, they rarely talk about their “conflict culture”—that is, the written policy and procedures for settling interpersonal disputes in the workplace and, even more importantly, the unwritten rules.  Researchers have found that many workplaces have no identifiable strategies for resolving the everyday interpersonal conflicts that arise. Depending upon the organization and leadership (and even individual managers), there may be different incentives available for cooperation and collaboration—or for competition and conflict—among workers. To test your own organization’s conflict culture, ask yourself the following questions:
As you can see from the scenarios above, your organization may be set up for a negative culture of conflict, and that can be a concern for human resources. The problem is that most workers avoid conflict when they can, inevitably tolerating a high level of discomfort without speaking up. This can lead the organization to develop a “normal” culture of distrust, with a general sense of anxiety that can cause major dissatisfaction that reduces productivity and increases turnover.

Conflict, unlike fine wine, does not improve with age. By the time someone from human resources is brought in, the conflict may have escalated to the point where people are refusing to speak to each other and a resolution may be difficult to achieve. The costs to the organization are significant, with studies reporting conflict taking up to 20% of managers’ time (Besic & Stanisavljevic, 2014).

Studies have shown that early intervention in workplace disputes through facilitated mediation is a viable and efficient means of resolving or reducing the negative impact of conflict in the workplace (Teague, Roche, & Hann, 2012). Mediation has been around for a very long time and has gained popularity as a workplace intervention as more people are exposed to alternative dispute resolution and as workers become more empowered and educated about their rights in the workplace. Oddly enough, mediation is an approach that puts rights-based problem-solving aside in an effort to generate a more durable and satisfying solution. The goal of mediation in the workplace is for the problem to be solved by discussing it and finding a mutually agreeable solution, allowing people to then get back to work.

While there is no one definition of mediation, Christopher Moore defines it as: “The intervention in a negotiation or a conflict of an acceptable third party who has limited or no authoritative decision-making power, [and] who assists the involved parties to voluntarily reach a mutually acceptable settlement of the issues in dispute” (Moore, 2003). With this definition in mind, there are some key components that human resources personnel may use to their advantage to help make mediation successful:
Timing and threat seem to be the two most problematic issues in using more mediation in the workplace. Even though all the evidence points to the advantages of early intervention in conflict, most employers still report that mediation is used as a last resort—not a first response. These lost opportunities may be reflective of a culture that is more encouraging of conflict than of conflict resolution.

That leads to the second issue: the concern for potential power imbalance and the use of threat by management as part of coercion for employees to participate in mediation. Many managers are loath to give up the power that comes with authority in order to settle disputes. Therefore, if managers feel they are left out of the mediation process, they may threaten employees of the consequences that await if they don’t settle. Managers may tell employees that not participating in a mediation is insubordinate and uncooperative. This can be self-defeating if the ultimate goal is to empower employees to seek early resolution to conflict.

This demonstrates how important it is that leadership speaks a language of dispute resolution and that managers and supervisors at all levels buy into it. Mediation, like any tool in the workplace, works best when everyone understands the purpose and is well-trained on how to use it. Mediation then becomes a first step—not the last step—to ensure a positive work environment.

Dr. Barbara Benoliel is the academic program coordinator in Walden University’s College of Social and Behavioral Sciences. Her research interests include Human and Social Services, Criminal Justice, Social and Health Services. Based in Toronto, Dr. Benoliel is also a professional mediator and president of the company Preferred Solutions Conflict Resolution, where she specializes in conflict management systems and alternative dispute resolution in organizations. Her current research and practice focuses on the many applications of restorative justice processes in the resolution of disputes.

Six coaching tips for your organization