Are pranks and grudges putting your company at risk? 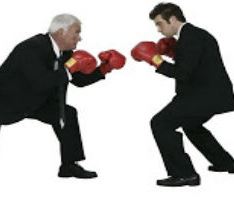 Pet
ty quarrels, childish pranks and ongoing feuds – they might all sound like playground problems at first but, according to one risk assessment firm, inane office arguments can cost businesses thousands of dollars every year.

Employment law consultancy firm Protecting, says that bosses across the country are failing to spot petty fall-outs that can rumble on for years with serious implications for staff morale and company profits.

Professional strategist Barbara Bowes says managers need to recognize the long-term repercussions of petty feuds, even if they seem trivial at first.

“Department leaders […] don't want to deal with internal, interpersonal conflict; they want to get on with the key mission of their business,” says Bowes. “Yet, if the conflict, petty or otherwise, is not dealt with, there can be huge costs to the organization and a huge human-resource headache for management.”

“If employees are spending all their time gossiping, protecting their turf, retaliating against each other, recruiting colleagues to support their side of the issue, and planning their personal defence, they aren't working on their assigned duties,” says Bowes. “What happens to productivity? What happens to customer service? I can guarantee that employee morale will be low and that the tension in the air will be so thick you could cut it with a knife.”

Research has shown that managers typically spend three hours a week dealing with employee conflict – taking into account the lost wages of all parties involved as well as the drop in productivity – the cost to your business begins to run very high.

Protecting’s advice? Nip it in the bud. Tackling a problem while it’s still small is much more manageable than taking on an office war that’s been waged for years. Spot it early and stop it spreading.

While it’s important for managers to realise the potential damage silly squabbling can cause, it’s also inevitable that there’ll be a funny story or two. During their workplace investigations, Protecting found one respondent who discussed an incident in their office dubbed ‘The Gary Barlow Incident’.

"Two of our clerical staff wouldn't even be in the same room together,” they said. Why?  “One drew a moustache on the other's picture of Gary Barlow,” they revealed. “The worst bit was that it was a whiteboard marker and wiped straight off, but it was 'the principle of the thing.”'

Have you had any workplace pranks or petty feuds that have gone too far? Let us know.