Does a "kick in the butt" excuse a punch in the mouth?

A Canadian court weighs in on a fight between coworkers that resulted in a $7,000 dental bill. 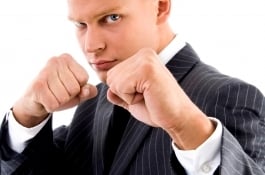 Kic
king a coworker can be seen as “consent” to a fight, according to the Ontario Small Claims Court decision.

“Provocation” can be a mitigating claim in battery charges, according to Ontario employment lawyer Andy Pushalik, from Dentons LLP.

Peng Li and Winston Furguson worked together in the shipping and receiving department of a furniture company and the incident at the centre of the case followed allegations from Li that Furguson was stealing from the company.

According to the court summary, in April 2011, Li confronted Furguson and yelled at him in such close quarters that spit unintentionally landed on Furguson’s face. As Furguson broke free, Li kicked him in the “butt”. Furguson retaliated, punching Li twice and loosening two teeth, which cost $7,000 to repair.

Li took Furguson to the Small Claims Court, arguing that he was entitled to damages. He also initially brought action against his employer on  a range of claims including wrongful dismissal, but dropped this claim before the trial started.

Judge M. A. Pikkov found against Li, saying he “provoked the incident he is claiming damages for.”

“Having insulted, berated and confined a person at close quarters, then scuffled with them and kicked them I cannot see how a reasonable person could maintain that a punch or two in return was beyond their reasonable contemplation as being within the scope of what they had implicitly consented to,” Pikkov said. “I also cannot find that Mr. Ferguson intended serious bodily harm to the plaintiff, even if he caused it.”

He dismissed the claim.

Pushalik noted that while Li’s claims against his employer were dropped, the incident would have been sufficient for most employers to discipline appropriately.

“Apart from the civil liability above, the altercation between Li and Furguson would certainly attract the attention of any employer's workplace violence policy and potentially lead to discipline,” he said.