An ever changing workforce needs new metrics to identify potential leaders, according to experts 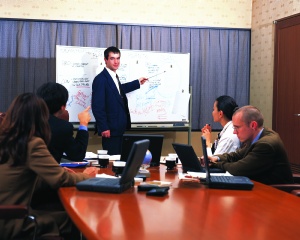 While most companies still adhere to the nine-box model when it comes to identifying potential leaders, tech experts from Microsoft and TINYPulse believe new workplace metrics can say more about an employee’s potential than traditional methods.

“Traditional organisational reporting structures limit managers’ visibility into how their employees are influencing and contributing to other teams. New workplace metrics are needed to help leaders get a more complete picture of this,” wrote Chantrelle Nielsen, Si Meng, and David Niu at Harvard Business Review.

According to the authors, Korn Ferry research identified an employee’s impact within an organisation and their influence on other employees as ways to better determine whether or not they have leadership potential.

TINYpulse, an app that anonymously measures workplace sentiment and peer-to-peer recognition, partnered with Microsoft Workplace Analytics to “examine the relationship between employee feedback, collaboration, and performance”.

Using TINYPulse’s Cheers for Peers tool in which employees can send ‘cheers’ to each other for good work, they tracked how many cheers were sent and received per employee over a six-month period.

Microsoft then used the aggregated numbers to analyse its correlation with ‘network centrality’ in emails and meeting networks within the same time frame in order to understand how peer recognition transmits to organisational influence.

“This means the group of people who received the most praise from colleagues acted as communication hubs for the entire organization and were central to work getting done,” they said.

Further to this, TINYPulse combined a list of top-performing employees with high leadership potential and Microsoft matched that with email and calendar behavioural data.

First, they found out that high performers spent four more hours collaborating internally as well as having a larger internal network than their low performing peers. Second, they spent 34% more time interacting with product and engineering groups than the team average.

“By analyzing this data, we were able to quantify the specific behaviours behind high-performing groups being flagged for leadership development and management opportunities,” said David Niu, CEO of TINYpulse.

“Understanding the how behind improved performance helps us identify the right behaviours to encourage and reward, which means development opportunities are open to more people.”

“The traits of high performers are multidimensional, nuanced — and sometimes hidden,” they said.

“Although it is in its early stages, the powerful combination of self-reported employee feedback and objective measures gleaned through aggregate calendar and email activities can provide a more complete picture of performance and potential.”