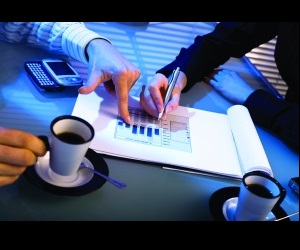 The footage is part of a $60million class action against the charity fundraiser Appco Group Australia.

Lawyers have signed up 730 claimants in Australia who allege they were paid as little as $5 per hour for up to 80 hours per week.

The latest video shows male workers of an Adelaide company who were engaged by Appco simulating sexual acts on colleagues who failed to meet their sales targets.

The footage was filmed in April 2014 at a marketing company called On Demand Sports which is now known as Visionary Direct Enterprises.

Rory Markham, lead partner with Chamberlains Law Firm, described the video as the “worst he had seen”.

"The video depicts a series of pseudo sexual acts performed on men by other men in a room's morning meeting which we're instructed was orchestrated by the managing director of that company," Markham told The ABC.

"It's a video that can't be explained in any employment or any business context.

"No employer in Australia could get away with that sort of behaviour. It appears to be the relics of a very long lost navy ritual that we don't see in the Australian context any more."

Appco said that while there may have been a small number of examples of distasteful and offensive activities, the marketing companies only conducted activities which they felt were “fun and motivational” and believed were perceived in that way by those involved.

HC contacted Appco for comment and their statement said they will terminate its contract with any marketing company that promotes or tolerates offensive or inappropriate activities amongst its contractors.

“Appco Australia acknowledges that, in the past, in some of the 60 (approx.) businesses that it sub-contracts to provide services to Appco’s clients, there may have been motivational games that, while well-intentioned, crossed the line into improper behaviour,” said the statement.

Appco also said that the marketing companies were not made aware that some people might have been made to feel uncomfortable or distressed by participating in or watching these activities.

They added all marketing companies sub-contracted by Appco must now confirm in writing that they have comprehensive anti-bullying, anti-harassment and workplace health and safety policies in place.

Moreover, all members of staff and independent contractors must be made aware of those policies and receive training about them.

“Any such activities were conducted without the knowledge, permission or encouragement of Appco. These activities have now been banned and represent a breach of contract with Appco,” said the statement.

“Appco Australia notes that it has never been alleged that activities like these have ever taken place in an Appco office.”

Appco were also recently in the spotlight late last year when further footage showed their charity workers in Melbourne allegedly forced to get down on their knees and 'peck' each other.

The mobile video showed workers cheering and laughing as two men on their knees 'peck' each other to the ground while their hands were behind their back.