A government agency is suing the Construction, Forestry, Mining and Energy Union for entering a building site without authority. 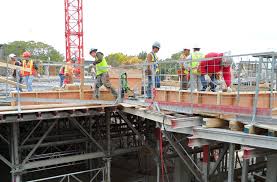 The
Construction, Forestry, Mining and Energy Union (CFMEU) is reportedly being sued over an incident that occurred at the Royal Adelaide Hospital construction site two years ago.

Fair Work Building and Construction – the federal agency responsible for regulating the industry – is claiming that the union entered the building site in November 2013 without authority to address members about a worker’s self-harm.

7News Adelaide reported that the CFMEU has responded by arguing that it had the relevant safety permits to enable members to arrive without prior notice.

The case against the CFMEU is listed for a hearing in the Federal Court in September.

Although the union says it fears that mental health problems at the new Royal Adelaide Hospital will worsen with the deadline for construction looming, Health Minister Jack Snelling said last week that employers will not place unfair pressure on workers.

“We certainly expect [bosses] not to put undue pressure on workers and have a safe workplace,” he clarified. “That’s our number one priority.”

According to 7News Adelaide, the CMFEU is planning to launch a campaign to convince senators to vote against a new bill which would reintroduce the Australian Building and Construction Commission (ABCC), arguing that the move would reduce safety on work sites for employees.

Tony Abbott announced in July last year that the government wanted to reintroduce the commission, which “added some $6 billion a year in productivity improvements to the construction sector when it was fully operational”.

The ABCC was originally introduced in 2005 after the Royal Commission into the Building and Construction Industry found “lawlessness” was rife within the industry.

The federal government has indicated that the bill would be voted on within a fortnight.

HC contacted Fair Work Building and Construction for comment but FWBC was unable to comment prior to publication.