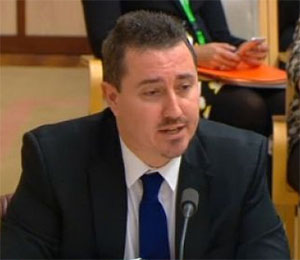 The human resources boss at the department of Human Services has allegedly been threatened with a “knife through his heart” by an embittered employee.

The Australian Public Service is in the grips of a bitter and protracted enterprise bargaining process, and the alleged death threat was one female employee’s response to an email from HR boss Adrian Hudson.

Hudson had sent the email, outlining the latest in the organisation’s enterprise bargaining process, to all staff, however some 60 departmental public servants, including the accused, forwarded the email to “external” recipients.

The accused female public sector worker sent Hudson’s email to her husband, allegedly adding her own written message: "If I had a knife I would like to put it through his heart," referring to Hudson.

Hudson told a senate estimates committee last week that all 60 public servants were investigated, with no action taken against 40 of the workers, 13 issued with “reminders” of the department’s email policy and five slapped with official warnings.

Hudson told senators that he was responsible for deciding which of his employees were disciplined over the email saga, but denied that those who bad-mouthed him were specifically targeted.

“It was not an issue about having bad words,” he said in response to questions from Labor’s human services spokesman Doug Cameron.

“It was an issue about whether or not the contents included from the individual employees met the requirements of the APS Code of Conduct or not,” he said.

The Senate committee was told the department of Human Services took the "threat" against Hudson, "enormously seriously" yet stopped short of calling in the Australian Federal Police.

"I find that extremely offensive and a threat to our staff that we take enormously seriously," Barry Jackson, Human Service's manager of shared services told senators last Friday.

Hudson said a code-of-conduct investigation was being carried out against the female public servant involved.

"The comments ... were very serious in nature and I took the view that they had the potential to be contrary to the APS code of conduct and as a result that matter was referred for investigation," he said.

"I took that message to be inappropriate and I believe that, following an investigation, it could be deemed to be a threat."

However, Cameron said Hudson was in no fear of his life and was simply making an example of one employee.

"The reason you didn't go to the federal police is because never for one minute did you think that your life was being threatened and what you're doing is setting about making an example of one individual," Senator Cameron told Hudson.