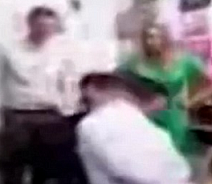 Charity workers in Melbourne who failed to meet their sales targets were allegedly forced to get down on their knees and 'peck' each other.

The footage has emerged after allegations of systemic bullying within the sales team of the marketing company Appco.

The mobile phone video shows office workers cheering and laughing as two men on their knees 'peck' each other to the ground while their hands are behind their back.

The cock fights took place often on Friday afternoons, according to The Age.

Moreover, around 500 former Appco employees have joined an $85 million class action against the company, with some claiming they were only paid as much as $2.50 an hour. Some were also allegeing that they were bullied when they questioned their workplace rights and were made to work 80-hour weeks.

The lead litigant in the class action, Jacob Bywater, said the cockfights also occurred if somebody made an error during the week or if they were late to a meeting.

Another recently released video showed Appco workers taking part in a "slug race" where staff were made to slither along the floor.

Appco said they have requested law firm Baker & McKenzie to conduct an independent investigation into bullying and harassment and will use all of the findings to inform its "robust action plan, elements of which are already in place".

Appco also said they will immediately terminate its contracts with any marketing company found to have tolerated this type of behaviour.

Appco has contracts with 64 independent marketing companies, which are responsible for engaging independent contractors to conduct face-to-face sales and fundraising for Appco’s clients.

Appco CEO Martin Gaffney added that it is absolutely incorrect to suggest that Appco allowed or condoned the obscene behaviour described by the ABC.

“These allegations describe outrageous and completely unacceptable behaviour, which would not be tolerated by Appco Group Australia,” Gaffney said.

“Appco would immediately sever ties with any marketing agency that encouraged bullying and harassment activities. And we would require marketing agencies to weed out any independent contractors who initiated such behaviour amongst fellow contractors.”