Is hot-desking bad for your health? 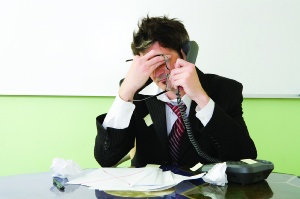 Public servants at the Australian Taxation Office's Docklands and Gosford branches are being forced to forgo their private work stations in favour of hot-desking.

The ATO staff now have a locker, located away from the working area, where they store their work and personal belongings.

The Australian Services Union said if the ATO is allowed to use hot-desking at Gosford and Docklands, it will implement hot-desking over coming years at other ATO offices.

“The ATO believes hot-desking will reduce its accommodation costs by reducing the number of desks it needs,” said the ASU in a statement.

“Of course, the ATO does not use the expression, ‘hot-desking’. It has a terrible reputation because it was designed to save accommodation costs for employers.

“It was not designed to provide an improved working environment for staff. The ATO is now using the expression ‘flexible work arrangements’ instead.

“It created huge non work areas at its accommodation pilot at level 8 at Docklands to create the impression all flexible work spaces would have heaps of room to socialise in or to just get away from your desk.”

The ASU said the ATO staff were not consulted about the trial, and has met with the ATO to try resolving the matter.

Moreover, they said the ATO is forcing hot-desking onto workers by exploiting a 2001 agreement to allow the trend to accommodate field staff helping introduce the GST.

The ASU expects to go to the Fair Work Commission for an arbitration about whether the ATO Enterprise Agreement prevents the ATO from using hot-desking.

Complaints from the ATO staff ranged from arguments arising over the desks to not being able to put up pictures of their family at their work stations. Some employees also argue it poses health and safety problems.

“As far as I’m concerned the Pilot at Docklands is not working as meant to be, there are issues with lockers not being big enough, call centre staff are not moving desks as they are told to stay in one area,” said one staff member.

“Arguments are arising between some staff as they don’t want to move desks. Of course the powers above will not admit to it.”

Another employee said “I don’t want to have to clean up after people who leave a mess at a work station”.

“When I go and attend a meeting I don’t want to come back to a desk I started working on in the morning and find it occupied.”

HRD contacted the ATO for comment and a spokesperson said they have consulted with staff around activity-based workspaces to enable them to be more adaptable to business and staff’s needs.

"Feedback we received from trial participants through an independent evaluation was very positive and revealed an overwhelming support for the layout offered in an activity-based workspace," said the spokesperson.

"An activity-based working environment will provide staff with more efficient access to a wider range of facilities where they can choose the environment that best supports their work. All staff will have a desk and facilities to store personal items.

"Where there is the opportunity in the fit-out of new buildings or refurbishments the ATO will consider how to design spaces in a way that creates a healthy working environment that improves flexibility, agility, collaboration and productivity.

"In respect of ongoing discussions with the Union about their dispute, the ATO will not be commenting."