One man is suing his former employee for a staggering NZ$590,000 – claiming he’d been pushed to the brink by underhanded bore tactics. 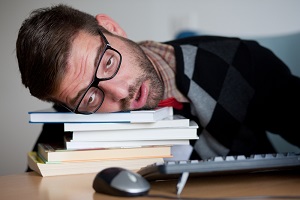 Burn out is now universally accepted as a valid employment ailment but could bore-out be the latest kid on the HR block? One man says he was pushed to the brink by his former employer’s underhanded bore tactics and now he’s suing for a staggering NZ$591,115.

Frenchman Frédéric Desnard has accused prestigious perfumes company Interparfum of drastically reducing his managerial responsibilities and burdening him with mind-numbing drudge work instead.

Based in Paris, Desnard described the four-year process as "an insidious descent into hell, a nightmare” – he also claims that the extreme boredom brought on a host of health issues, including epilepsy, ulcers, sleep problems and depression.

"I went into depression, I was ashamed to be paid to do nothing," he told French news agency, AFP. "The worse part of it was denying this suffering."

Desnard was fired in 2014 after seven months' sick leave – he’s seeking over €360,000 in damages and lost pay which includes holiday pay as well as missing out on a potential promotion.

However, a legal representative for Interparfum has staunchly denied the recent allegations which – he says – defy Desnard’s previous claims of burn-out.

"He never said anything about being bored during the four-year period and if he actually had nothing to do over these years, why didn't he mention it?" asked lawyer Jean-Phillipe Bénissan.