Working dads are willing to take a pay cut to spend more time with their children, according to new report 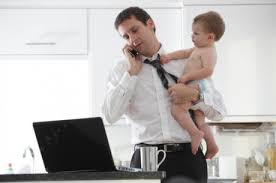 More than half of fathers would like a job that is less stressful so they can help bring up their children, according to the recently released 2017 Modern Families Index.

The report, which is based on a survey of 2,750 parents in the UK, found that 53% of millennial fathers want less stressful jobs, and 48% would be willing to take a pay cut to balance the demands of their work and family lives.

Nearly half of those surveyed claim they struggle to achieve a worklife balance, and one fifth say their work has been inflexible about childcare arrangements. Almost half of fathers also stated they had lied to their employers about family responsibilities in case it “got in the way” of their jobs.

The report shows that younger fathers in particularly are willing to reduce their incomes and sacrifice their career progression to be more hands-on with bringing up their children.

Experts warn that this significant shift in workforce mentality could mean a ‘fatherhood penalty’ for a new generation of men. If the trend continues, and companies aren’t willing to change their approaches to working parents, there are concerns that organisations will lose out on top talent.

Sarah Jackson, chief executive of the UK charity, Working Families, says employers must prioritise the parent penalty issue. “Making roles flexible by default, and a healthy dose of realism when it comes to what can be done in the hours available, are absolutely vital,” she said. “A game changing first step would be government creating a new, properly paid, extended period of paternity leave – sending a clear signal that government recognises the aspirations of modern fathers and is serious about tackling the motherhood penalty that blights the working lives of so many women.”

The impact of the motherhood penalty is well documented, and experts claim the inequality that women suffer will only worsen unless governments intervene. Many experts claim that sharing caring responsibilities equally between mothers and fathers is the key to reducing the gender pay gap.