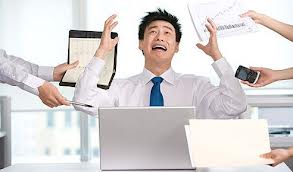 Researchers from the Kelly School of Business at Indiana University recently revealed that people employed in highly stressful jobs were “third less likely to die than those with easier roles – but only if the worker is in control of their own workflow”.

They tracked workers in their sixties for seven years and found that those who had freedom and control over their high-stress role were 34% less likely to have died than those less stressed than them.

But without the freedom to make their own decisions, workers in high-stress roles “were the most likely to be unhealthy and die earlier”.

Those without control of their workflow would lead to workers indulging in unhealthy behaviours such as smoking and overeating, they said.

They also found that cancer was the leading cause of death for highly-stressed workers followed by circulatory system problems and respiratory complications, reported The Telegraph.

“You can avoid the negative health consequences if you allow them to set their own goals, set their own schedules, prioritise their decision-making and the like,” advised Gonzalez-Mulé.

“Stressful jobs cause you to find ways to problem-solve and work through ways to get the work done.”

“You are able to set your own goals, you are able to prioritise work. You can go about deciding how you are going to get it done. That stress then becomes something you enjoy.”

They further stated four ways you can hack your brain into thinking it’s not stressed:

1)    Tell your brain repeatedly that it is excited, not anxious, and you can change the way it performs;
2)    Breathe in slowly for five seconds then out for six to change the brain’s chemistry;
3)    Adopt a ‘superhero pose’ by pumping your chest out and straightening your spine. This triggers the ‘fight’ rather than ‘flight’ emotion;
4)    Squeeze your right hand shut for 45 seconds, open it for 15, then close again for 45. This puts your left brain in ‘challenge’ mode and would lessen your anxiety and improve performance.