As the latest Silicon Valley trend takes hold, we ask if paid pre-cations are really sending the right message to potential new hires. 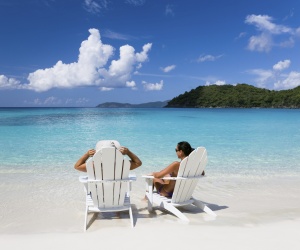 A growing number of Silicon Valley start-ups are offering paid pre-cations to all new hires but as the trend takes hold, we ask: is it really sending the right message to potential new hires?

Jason Freedman is CEO of the commercial real estate search-engine company, 42 floors. Freedman offers all new employees two weeks paid vacation prior to their employment.  “It’s like, ‘Yeah, have a great time! And when you get back here, work your ass off,’” he explains.

Business blogger Mary Williams says Freedman’s attitude is exactly the problem. According to her, paid pre-cations are nothing more than a trap - she likened them to “a bachelor party for your career.”

“We are already a vastly overworked nation,” explains Williams, “we put in considerably more hours than we did a generation ago —  and most of us are doing it while facing what the New York Times last year called “flatlined” wages.”

A study released earlier this year revealed that Americans take only about half the vacation time they’re entitled to. Williams says this is because workers are afraid of repercussions and are afraid management will consider them expendable.

According to Williams, offering paid pre-cations to new hires sends the message that your company doesn’t support staff in taking time off once they’ve begun proper employment. It’s a case of “get it now before it’s gone.”

She says companies offering paid pre-cations simply want new employees to clear their heads before making the transition to their company and to give back to the newbies before they even start.

Powell also draws attention to the fact that the concept isn’t actually that new – employees have been given signing bonuses of one sort or another since the early 1900s.

However Powell warns employers to be wary of offering the incentive on a no holds barred basis; “In case an employee exists soon after hire, make it part of your offer letter and policies that payback would be required.