The head of Australia Post has called upon hiring managers to consider ‘social inclusion’ policies as a means of combating the lure of Islamic extremism. 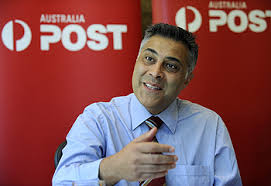 Australia Post’s chief executive has called upon companies to offer trainee schemes to young Muslims as a way of countering the enticement of extremism.

Ahmed Fahour told a Melbourne audience yesterday that the past 18 months had been “really hard to endure” due to the increasing prominence of Islamic State (IS) in the Middle East.

He said that the extremist organisation was neither “Islamic nor a state”, adding that its “twisted ideology” was tearing families apart “both, here, in Australia, and in nations right across the globe.”

He also warned that right wing “pockets of intolerance” had used the internet to suggest that Islam and the West are incompatible, referring to debates over banning headscarves, protesting proposed Mosque constructions, and opposition to Halal food.

Fahour claimed that being in a job was the best way of preventing people from feeling alienated, revealing that he had recently spoken at a business conference about the benefits of considering social cohesion during the hiring process.

“I said to the CEOs sitting around the room, think long and hard, that when the next CV comes in front of you that has the name ‘Mohammed’ or ‘Abdul’ or something like that, and you knocked it back, what role have you played in these people's social exclusion,” he said.

He added that job offered teenagers and young adults a door to social inclusion.

“That is true for young people across all of our minority communities, whether they be gay, African refugees, or Muslim Australians,” Fahour said.

He also warned that IS should not be underestimated.

“They have grown from a small local group of hard-core jihadists – and disseminated their barbaric ideology to a global audience,” he said.

“In the process, they have tapped into a sense of alienation – or exclusion – that exists in isolated pockets of every society.”

“They use social media skilfully, to connect these disaffected voices to one another. In the process, they give these alienated individuals a sense of belonging.

“And that desire to belong to something – anything – makes these individuals blind to the utter senselessness of their unifying cause.”

“[The ‘I’ll ride with you’ hashtag] went viral on Twitter here in Australia and across social media platforms globally,” he said.

“It was a rare example of the forces of harmony and pluralism deploying social media to counter the voices of intolerance.

“In an instant, it restored a sense of belonging amongst Australian Muslims. It reinforced my sense of citizenship. It filled me with an overwhelming sense of pride in our nation.”