With The Coaching Room’s help, the NSW Waratahs are proving that being ready to play the next game in the right frame of mind puts them in a winning position, regardless of whether they win or lose 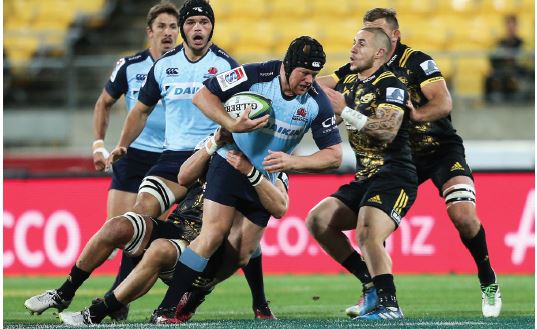 With The Coaching Room’s help, the NSW Waratahs are proving that being ready to play the next game in the right frame of mind puts them in a winning position, regardless of whether they win or lose

In 2016 and 2017, the NSW Waratahs have been an organisiation with an HR crisis. Despite intermittent success on the rugby field, like many organisations they have found themselves up against an entrenched culture of underperformance both inside and outside the office, and in the wider rugby fraternity.

It’s a challenge that CEO Andrew Hore knows has to be tackled. The Waratahs need a new game plan.

“To change the situation we are in, we need to change,” Hore tells HRD. “To enable us to change, we need to be able to clearly identify what is working for us and what is not, to address those issues that aren’t working in an open manner, and have the ability to open people’s minds to the issues and influence them to be a part of the journey for change,” he says.

Step 1: Call in the coach
The Coaching Room managing partner Jay Hedley helps leaders around the world to more clearly see the blind spots that can limit them in their professional and personal lives. With a passion for awakening people to their true potential by helping them engage with and relate differently to themselves, he could immediately recognise where the Waratahs were holding themselves back from greatness.

“The team has been underperforming, showing glimpses of brilliance along with prolonged periods of mediocrity throughout the 2017 season,” Hedley explains.

The problem is deep-rooted. “Coaches and players have realised that they have been holding themselves back to protect themselves.”

Called in to work with head coach Daryl Gibson and his team of coaches, Hedley has been charged with helping these key staff unlock their leadership potential so they can in turn engage and enable players to actualise theirs. Using a blend of science, psychology and strategy, the change effort is paying off.

“The 2016 and 2017 seasons have facilitated growth and development personally and professionally for executives, coaches and players alike,” Hedley says. “Specifically, learning how to lose – but more importantly, how to grow and develop from losses – has been a painful yet rewarding experience.”

Gibson says transformation and the process of change can be difficult but is well worth it. “Jay has facilitated the awareness of the language and frames we are using, and how we can use this to create a high-performance team through creating greater personal meaning for our players.”

The effort has been so successful that, in addition to working with Gibson, Jay now works with CEO Andrew Hore and his executive team as well as select players on high-performance leadership. “Ours isn’t an easy process, but it’s a very rewarding one for those with the courage to look,” Hedley says.

Step 2: Change the game plan
The Coaching Room’s approach combines leading methodologies of the human potential movement. Hedley says the key is a shift from limiting ‘beliefs and values’ to ‘core principles’, and the creation of an organisational ‘frame intelligence’ that enables change to take root through these core principals.

“Frame intelligence is the ability to recognise and articulate the highest meaning frames governing current performance so leaders can gain objectivity and lead different and more effective performance,” Hedley explains. “In the case of the Waratahs, old beliefs about how the 2017 season should have progressed, about the opposition, about using fear of failure as a motivation strategy, for example, have been brought to light and discussed at length. Values such as integrity, among others, weren’t reflective of the core principles required to facilitate high-performance leadership.”

Beliefs and values
Hedley says beliefs and values are fixed structures of limited perspective. “These might be ‘I am this kind of person’, ‘we are this kind of team’, ‘this is our strength’, ‘this is our weakness’,” he says. “They create cultural presuppositions – or frames and rules – that determine behaviours, like ‘I can’, ‘I can’t’, ‘we can’, ‘we can’t’ – behaviours I’m sure any HR leader today would easily recognise,” he says.

These fixed barriers include seeing fear of failure as a static thing to be avoided, or beliefs about how you may be perceived by an external observer or audience, including the thoughts of an opposition team, the crowd, or even the media. They also facilitate dependency and lack of responsibility – or an attitude of ‘I do what I’m told’ – and paradoxically drive independent and selfish decisions, actions and outcomes.

Core principles
Core principles on the other hand change the rules of the game, because they are “intelligent and evolving, fluid structures of simultaneous perspectives”. By taking multiple perspectives into account simultaneously and enabling a more holistic view, individuals and organisations can be more adaptive to the actual unfolding reality around them and be with the truth of what’s actually happening now so that they can awaken and actualise a team’s potential through a focus on possibility.

“A focus on core principles allows people to be open to and constantly integrating feedback rather than failure, and seeing loss as an opportunity for growth and development, which is key in the rugby game,” says Hedley.

With a growing recognition that ‘players play themselves’ at the elite level because the mental inner game is where the game is really played and won, not the outer game, they are able to engage self-actualising frameworks – “the more you live them the more they live you” – and employ developmental metaphors that unite rather than divide, and inspire rather than result in fear.

“Core principals facilitate interdependent, collaborative, intelligent decisions and actions on behalf of the team and facilitate responsibility through awareness, intentionality, self-management and self-leadership. They allow us to live intentionally and create a legacy that evolves through time and space.”

Step 3: Play to win (even if you lose)
CEO Andrew Hore says the NSW Waratahs are now focused on creating a strong sense of purpose, and growing comfortable with the need to have fierce, open conversations that result in change.

As a result of The Coaching Room’s intervention, he says things have already started to change.

“What is starting to shift is the open and transparent discussions we are having for the betterment of the organisation, without people feeling persecuted or issues becoming personalised. We’re also starting to see a marked difference between the feelings of comfort in addressing issues shown among the people who have engaged in the program and the lack of confidence in those who have not.” Hore says that while it is a process and mistakes will be made, his only frustration now is that he is unable to teach and spread the skills being learned fast enough through the organisation.

“We’re learning how to communicate with a common language, as well as understand people’s differences in how they perceive the world and what frames they and we create in our day-to-day lives based on past experiences and their individual personalities, and how to handle those differences in the relationships they have for the betterment of the company,” he says.

“Given more time, I have no doubt The Coaching Room will take us on a journey which will teach us even more about the power of collective responsibility and interdependent leadership we never even knew existed.”