Workplace drug testing is rising across all industries, experts claim, suggesting that drug use is stretching as far as the boardroom. 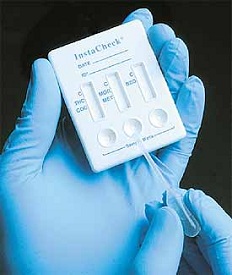 Wor
kplace drug testing is on the rise among Australia’s white-collar workforces.

The workplace drug testing industry – which is valued at around $80 million – sees an average annual growth of up to 20%.

According to the Sydney Morning Herald, the biggest boost in testing will be for sales representatives who drive company vehicles.

While the testing of mine site, transport and logistics workers remain the pillars in the Australian industry, experts are reportedly noticing an increase in demand from white-collar sectors.

Much of this stems from companies attempting to prevent problems, which have in recent years been uncovered by rising incidences of random drug testing being carried out on drivers by police around the country.

Michael White, the company’s managing director, said on Monday that while the demand for testing within the mining sector has seen a downturn, other industries have made up for the decrease.

“There's a big call for [staff drug testing], partly because of rising methamphetamine use in the community,” he told the Herald.

White added that community concerns over the rising use of the drug had led to more employers implementing workplace drug testing procedures, which were now commonplace as a part of pre-employment processes.

According to White, when Frontline undertook workplace drug testing programs, it generally found that between 12 and 15% of employees tested positive for a variety of drugs.

While he did not disclose any specifics, White told the Herald that on one occasion Frontline had collected swab samples from the boardroom of a company and was “shocked” to find traces of a range of substances.

Andrew Liebie, national marketing director of Safe Work Laboratories – which began in Perth and is preparing to open an office in Sydney next year – said that he was noticing a gradual shift towards drug use within more “grey-collar” and “white-collar” industries, with the market for workplace drug testing growing at 15 to 20%.

He told reporters that in spite of this, Australia still had a long way to go before catching up with the US, where an estimated 70% of the working population had to partake in drug testing.

In the 1980s, the US percentage sat at just 10%, but has increased steadily since then due to legislative changes as well as changes to corporate attitudes.

Today, US financial services and stockbroking firms conduct “pre-promotion” tests, while Walmart is reported to conduct drug screening for all employees.

Liebie estimated that around 15% of Australian employees were now subject to workplace drug testing, compared to 5% a decade ago.