Lighter Side: Unusual ways to tell someone they’re fired

It’s not easy telling someone they’re fired, but you do have to actually tell them… 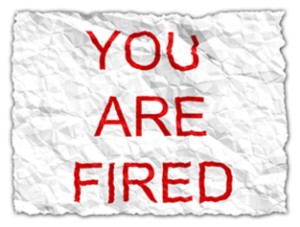 an style="line-height: 20.7999992370605px;">It’s not easy telling someone they’ve lost their job and we’re all guilty of trying to soften the blow with some carefully worded phrases but, in the end, you have to bite the bullet and tell them they’re fired – or at least that’s what we thought. Take a look at these particularly creative euphemisms that employers have used to show someone the door… Tracey Bryan said a friend of the family was let go less than tactfully: “I don’t know how this office would run without you!” their boss said, “But as of Monday, I’m going to find out.” When John Bagnall lost his job at EMI Records, he was given the boot via this back-handed compliment – “We’ve decided your outlook and talents are ideally suited to the freelance sector.” Downsizing is a legitimate reason to lose employees but don’t just hijack the “size” suffix and as a one-size-fits-all solution. Lorna Hughes said her friend was told she was losing her job because the company was “smartsizing”. “It seems especially cruel,” says Hughes, “not only are they firing you but they're telling you they're smart to do so. When in doubt, some mangers just defer to corporate jargon. Andy Micone says his favourite business jibberish was ‘realigning our resources to our corporate strategy,’ – “They told people that they ‘weren't being laid off’ but were simply ‘no longer in alignment,’ explains Micone. George Andre also shared some of the more convoluted excuses including “recycling out creative pool”, “maximising our throughput by steamlining our workforce” and “rethinking our future.” **We turned to question-and-answer website Quora for all contributions**