How to handle an employee with poor hygiene

It’s one of the most sensitive workplace subjects but ignoring it can isolate the employee and make others feel uncomfortable. So how do you tell someone they smell? 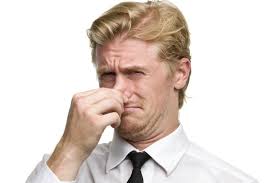 Tel
ling someone they have to change their personal hygiene habits is always a tough issue to tackle but ignoring the problem puts other employees in an unpleasant work environment. So, how do you handle an employee who smells?

“Wait for a pattern to emerge,” suggests Donna Flagg, author of Surviving Dreaded Conversations: How to Talk Through Any Difficult Situation at Work Definitely, “don't say anything the first, second or even third time you notice it.”

Halley Bock, CEO of leadership development company Fierce Inc., agrees. She says employers need to seriously consider whether the issue is affecting their work or the work of others.

However, several studies, including a 2013 survey by the Employment Office, have found that workers are significantly affected by colleagues’ cleanliness.

The 2013 study explored the effects of poor hygiene on productivity and found that 75 per cent of workers struggle to work alongside someone with bad body odour and 64 per cent find it difficult to work with a colleague who has bad breath.

So smelly co-workers do significantly impact productivity and potentially isolate themselves from other employees. The longer you leave it before telling them, the more damage is caused.

Flagg says it’s vital employers pick a private place for the conversation where they know they won’t be interrupted.

“When you do speak up, don’t ever say that several other people have ‘brought it to your attention,’” warns Bock. However, there will be some occasions when you’ll have to admit you’re not alone in your observations, especially if the employee accuses you of bullying or reports you.

Nobody wants an awkward conversation to last any longer than it has to – especially the person on the receiving end. You don’t have to be blunt but you definitely can’t beat around the bush.

Bock recommends five steps: name the issue, give an example, describe it objectively, clarify why it's important, say you want to resolve it and then invite the person to respond.

Flagg suggests the following; "I'm sure you're not aware of it but thought you'd like to know that I'm noticing an odd odour. I think it might be your (fill in the blank.)"

Put it in perspective

You’re probably going to feel uncomfortable having the conversation but it might do you both good to pretend you’re not. “Don’t make it a big deal.” says Flagg, “It’s only as big as you make it.”

If you can give the impression that the conversation isn’t awkward or uncomfortable, the employee is likely to feel significantly less embarrassed and won’t assume everyone has noticed. It makes hearing the unwelcome news a whole lot easier.

Talking to employees about a hygiene problem might seem daunting but in the grand scheme of things it’s just a minor blip. Keep that in mind and remember that the outcome is of benefit to everyone – no matter how uncomfortable the brief conversation might be.