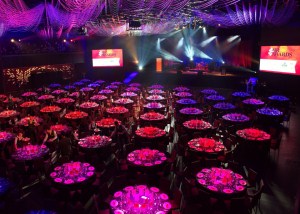 Nom
inations for the 2017 Australian HR Awards reached a new record this year following another strong response from the industry. Total nominations were up over 40 per cent compared to last year, with hundreds of entries from companies, individuals and HR teams across Australia.

In particular, the number of nominations in the coveted Australian HR Director of the Year category was up almost 60 per cent compared to last year while other awards like Best Change Management Strategy, Australian HR Rising Star of the Year, and Best Health & Wellbeing Program also saw a significant increase in number of entries.

HRD editor Iain Hopkins commented on the event’s continued success over the years.

“The Australian HR Awards is well established as the leading independent awards for the HR profession and it’s fantastic to see industry support continue to grow - this year being no exception,” he said.

“Last September we saw a record number of 760 HR leaders attend the event and judging from the increase in high-quality nominations across the board this year, we are confident this year’s event will be another success.”

The research process to determine this year’s finalists is currently underway. All finalists will be notified and announced in the July issue of Human Resources Director (HRD) magazine as well as the official event website on Monday 17 July.

The 2017 Australian HR Awards will be held at The Star Sydney on Friday 8 September. It is supported by several leading HR product and service providers including Accumulate, CEB, Davidson, Elle Belle Recruitment, Smart Group and Solterbeck.

Find out more at www.hrawards.com.au.