Lighter Side: Who’s the most productive worker around, or not?

Home may be where the heart is but does it also hold the key to employee retention? 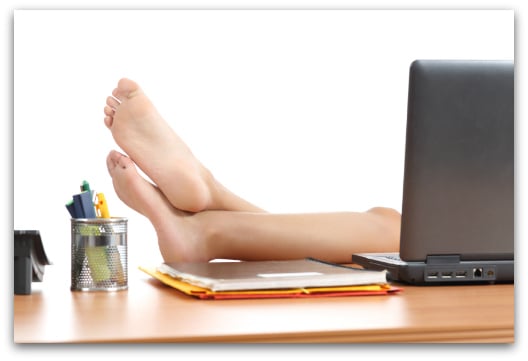 Can
working at home make your workforce happier – and help you keep up its productivity? The answer is ‘yes,’ according to a newly released study from the Richard Ivey School of Business at the University of Western Ontario. What’s more, the study says, employee retention rates are higher with at-home workers than with their office-based colleagues.

More than 2,000 knowledge workers and their managers at national telecommunications firm TELUS were surveyed during the year-long study, which took place between February 2013 and February 2014. TELUS implemented a flexible working program known as Work Styles in 2006 and over that time has seen increased employee engagement as well as a jump in attracting and retaining talent.

Improved work-life balance made itself apparent in the lives of nearly all mobile and at-home workers, according to the study. Ninety-eight percent of mobile workers and 99 percent of at-home workers said that work duties had low to moderate impact on their home and family life. In contrast, only 71 percent of in-office workers made the same claim.

“Work Styles provides our team with the tools, resources and support they need to work when and where they’re most productive,” TELUS Senior Vice President of Strategic Initiatives and Chief Communications and Sustainability Officer Andrea Goertz said in a statement. “We’ve witnessed the success of the program first-hand and the Ivey study confirms our belief that a flexible working program delivers substantial cultural, economic and environmental benefits to an organization.”

Why 1 in 3 think the humble office is doomed
Work is something people do, not a place they go
Lighter Side: Why working remotely sucks