As career changes go, it doesn't come much more extreme than this. A lawyer has given up his six-figure salary in order to start a circus and become a human cannonball. 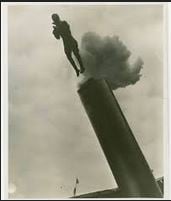 an style="line-height: 20.7999992370605px;">An Oxford-educated former lawyer has chosen to follow his heart and become a human cannonball instead of continuing on in his six-figure salary job. Thirty-year old Gary Stocker had a $2 million house and an impressive pay packet as a law writer and legal recruitment officer. But he decided to leave it all to dust and live in a caravan with a travelling circus performing as “The Great Herrmann”, according to The Daily Mail. Stocker spent tens of thousands of dollars setting up his own circus, Chaplin’s Circus, with his friend Mark foot. “Perhaps I only went to Oxford to please my mum – I realised that being in the circus was what I was destined for,” he says. “The circus is even harder than my previous jobs in terms of hours, but it brings freedom and variety. It’s so exciting, and every day brings something new.” And much to his surprise, Stocker’s mum wasn’t disappointed in her son’s chosen re-route, she’s actually really proud of him. It all hit him one day when he received a particularly huge windfall for a month’s work. His boss said to him, “you’re going to make so much money you won’t be able to leave”. That’s when Stocker decided he didn’t want to be enticed by money any longer. Then, his friend Foot, who is a street performer, suggested he get in on the act.  “When Mark put his proposal to me I realised that being in a circus was what I was destined for. I thought about his offer for all of 15 minutes before giving him a resounding ‘yes’,” he says. Stocker studied law at Oxford before landing a job at the London office of international legal recruitment consultancy Shilton Sharpe Quarry as an academic law writer. His performances follow a 1920s-themed show which tells the story of a circus on the brink of bankruptcy that is saved by an inventor who builds the world’s first human cannon. Close to 20 performers, including jugglers, acrobats and tight-rope walkers, take part in the show inside the 1,400-seat tent – the largest in the UK - which Stocker has funded.