Ping pong and pool tables and nomad seating, oh my 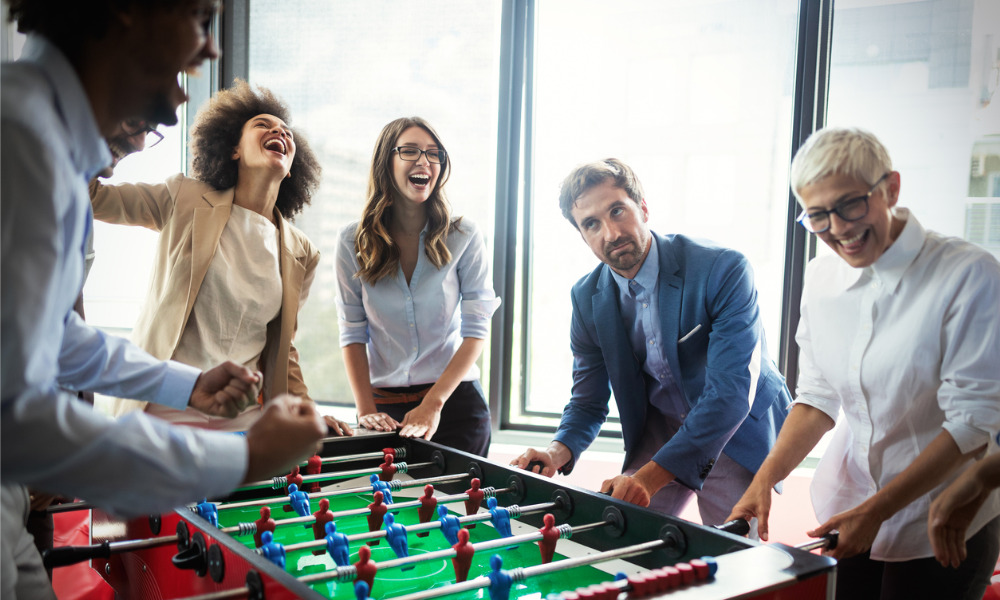 Attract. Retain. Engage. That is the mantra for human resources professionals in companies across the board, and sometimes the most difficult part of the magic formula is the last part of the equation — how to keep the talent you bring onboard focused, inspired and productive.

A major chunk of the workforce companies are looking to hire fall into the under 35 age group, and in a recent study this cohort was almost 10% more likely than the average to report their work environment is too distracting.

The 66% of the under-35 age group — compared to 57% overall — had three top complaints: coworkers they deemed to be “loud talkers”; open concept offices with noisy recreational areas; and the nomad work style, where there is no assigned seating.

Kane Willmott, CEO of iQ Offices, says it’s time to take a step back from the trendy office extras and look at how workspaces are making employees feel.

“There’s been a trend over the last five or so years where companies have gone to these distracting work environments,” Willmott says. “They think the best way to attract people is to put a ping pong table in, and a shuffle board and a kitchen, and have open work space for collaboration. I think the challenge is none of the focus is on what it takes to actually engage someone in the space and make them productive.”

The custom survey of 1,524 randomly selected Canadian adults was conducted by Maru/Blue in partnership with iQ, the largest Canadian-based co-working operator in the country.

Willmott says the survey helped give his team “definitive numbers on what Canadians are looking for” as they recently opened new offices across the country — with the original space in Toronto opened in 2012, and subsequent locations in Vancouver, Calgary, Ottawa and Montreal — and needed to look at the needs of the new markets. While iQ surveys its members frequently on what they need to be more productive “we haven’t reached outside our four walls,” Willmott says.

“I’ve always been obsessed with productivity. I’ve been an entrepreneur for a long time and you’re always thinking how do you get control of your time? It’s always been a passion of mine.

When we started iQ, we thought it was an opportunity for us to use the built environment — the actual workspace — in order to enhance the experience and focus on productivity.”

Willmott says what iQ does with its spaces is a response to the main concerns in the survey, and the vibe of the offices can be broken down into five categories.

The first is privacy — looking at audible and visible privacy within the space — and the second is noise reduction. Alongside “physical enhancements” to absorb sounds, there are also technologies out there that do a lot to manage distracting noise.

“We have sound attenuation devices in our space which takes out the high and low pitch of the human voice so you can’t hear what people are saying,” Willmott says. “It emits a frequency that takes that pitch out of human speech. You might be able to hear a voice if they’re a ‘loud talker’ but you can’t make out the words.”

The third thing iQ does in its spaces is look at health and wellness factors, and “swap out distraction for rejuvenation.” Get rid of the ping ping table and put in a quiet room with a massage chair, Willmott advises. Providing multiple work environments like banquette seating, private collaboration spaces, bar heights and even treadmill phone booths “so people can walk and talk and really get the blood flowing and really engage” are also great tactics, Willmott adds.

Next is bringing the outside in.

“That’s a big one in terms of natural light and fresh air,” Willmott says. “We have green walls and plants throughout our spaces — those are scientifically proven to boost productivity.”

Finally, Willmott says there’s nothing wrong with inspiring a little “office envy.” Building a so-called “Instagrammable” space — “a space that is designed in such a way that you want to take a picture of it and show all your friends,” he explains — translates into employees walking into a space where, every day, they’re inspired.

Willmott says he’s noticing a new counter-trend where companies are focusing more on the productivity piece and how that ties into the employee experience, and says the feelings a workplace evokes in employees has always been a core focus for him at iQ. He saw a statistic recently that over a one-year period, there was almost 100% growth in the title “employee experience” on LinkedIn — proof that companies are becoming more entrenched in the idea of enhancing what employees are walking into day after day.

From an HR perspective what really matters is how do you attract, engage and retain — “that’s what every company is all about.”

“Companies are going to take out the ping pong tables and the pool tables and all the distracting things and really think about what it takes to enhance the employees’ work day,” Willmott predicts.