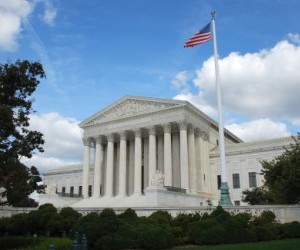 A 5-4 decision in the Supreme Court this morning found in favor of Illinois home-care providers who challenged their mandatory union dues.

The Harris v. Quinn case came close to overturning Abood v. Detroit Board of Education, which allowed public sector unions to impose fees on non-members. It was the same precedent that allowed the Illinois regulatory scheme requiring the workers in question to pay union fees in the first place.

In 1977, Abood found public employees could be required to pay union fees even if they weren’t a member, as long as they did not have to pay any portion of fees that covers political activity.

However, here the court drew a distinction between “full-fledged public employees” and “partial public” ones, saying the health workers in this case were merely partial public. The employees in question were not directly employed by the government, but instead were reimbursed through Illinois’ Medicaid program.