One female stand-up says “rapey” comments from an audience member were the worst she’s experienced in her 16-year career. 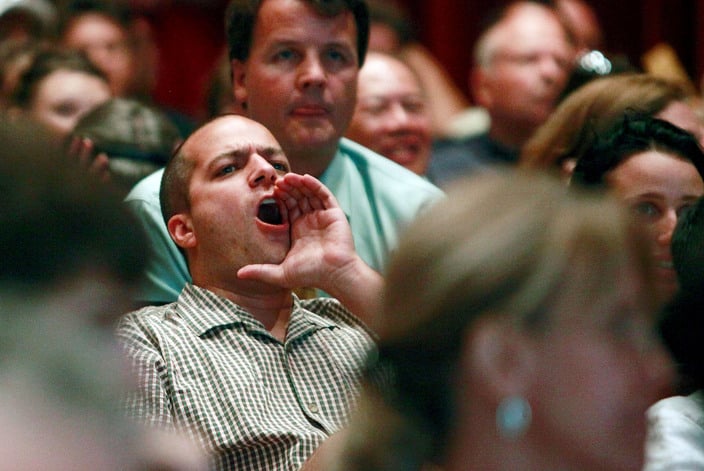 Com
edian Jen Grant is no stranger to heckling – if her 16-year career has taught her anything, it’s how to deal with disruptions – but she says comments made at a recent corporate gig crossed the line into workplace harassment.

“Even though it’s not something comics like necessarily, people are vocal sometimes and you’ve got to deal with it when they come at you,” concedes the comic. “But this was beyond heckling. This was harassment.”

Grant spoke out after a seemingly benign gig for the Ontario Printing & Imaging Association took a seedy tone – just three minutes into her set and a man in the audience began shouting comments Grant herself slammed as “abusive” and “rapey.”

“I’m not the type to just complain for no reason, I’ve done a lot of hard gigs with hecklers,” said Grant, who has performed extensively across Canada – but the successful comic has long ditched dive-bars in favour of “squeaky-clean” corporate comedy gigs, where her own material is heavily censored.

Sex, religion, politics and profanities are all off-limits – basically, all blue material is banned – which is why the comic was so shocked to have “threatening” and “humiliating” comments hurled at her while on stage at a country club.

According to Grant, the middle aged man began his verbal abuse with; “There’s a 51 per cent chance that my buddy here will have sex with you – and I will take the other 49 per cent.”

Grant says his behaviour progressively worsened until she could no longer stand the objectification and walked off stage.

“If I were in a comedy club it would’ve been a different story,” she said. “I am pretty good at putting hecklers in their place and they usually stand down because they quickly realize they can’t win against me.”

“I’ve done everything from rowdy one-nighters in rural Alberta to drunken Friday late shows in Northern Ontario,” she continued. “But I had to be clean at this show and not offend the people in the audience. I felt like I just had to take it. It was all so sudden and shocking too. I was shackled by my corporate constraints.”

“I was not able to do my job because someone was sexually harassing me,” Grant explains, in her blog. “As a stand-up comic I do not have a Human Resources Department. The stage is my workplace and I was publicly humiliated, objectified and belittled.”

The inappropriate heckler, who works for Montreal printing firm TC Transcontinental, has since been suspended with pay pending an internal investigation and the company’s VP contacted Grant the following day to apologise on behalf of the offending employee.

More like this:
Fast-forward – 2020’s most valuable skillset
Hospitality and HR – with Hilton’s VP
The corporate world through HR’s eyes