Women are turning to ‘strategic flirting’ to get ahead at work

Never heard of strategic flirting? It’s a real thing, it flourishes in certain kinds of cultures, and though it may work, it also has some drawbacks… 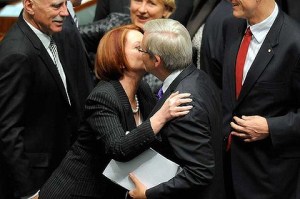 Bef
ore you roll your eyes at female co-workers who always seem to be batting their lashes at their male colleagues and supervisors, spare a thought for their corporate culture. It turns out workplace cultures dominated by masculine qualities like aggression, risk-taking, and assertiveness are part of the reason these women turn to their feminine guiles to succeed.

The findings come from a study of female attorneys’ descriptions of their working environments, says co-author Alexis Smith of Oklahoma State University. Explaining the kinds of high-powered, masculine cultures that foster strategic flirting, Smith says the cultures were not necessarily correlated with the companies’ gender balance. “These are firms that encourage employees to aggressively use their assets, whatever they may be,” he says. “Since it stands to reason that for women this will mean leveraging their sexuality, there tends to be significantly more flirting in these law firms than in others.”

Workers were asked how much they agreed or disagreed with certain descriptions of their office environments, which were categorized into feminine and masculine traits. Descriptions for masculinity included aggressiveness, assertiveness, forcefulness, ambitiousness, and openness to risk, and for femininity included cheerfulness, compassion, loyalty, sensitivity, and warmth. Masculinity and femininity were not mutually exclusive, and organizations could conceivably be high or low in both categories, or dominated by one side. On average, workplaces were considerably more masculine than feminine.

“What comes as a something of a surprise is that an environment like that leaves women who do flirt exposed to a lot of hurtful slights, like being treated rudely or as if they were stupid or being excluded from meetings,” says Smith. “Permitting that to happen in a setting that encourages the behavior in the first place is hardly very cavalier.”

The masculine environment can begin long before an employee comes on board, however. A German study found female candidates were less likely to find job advertisements appealing if they were filled with traditionally masculine trait descriptions, like “assertive”, “independent”, “aggressive” and “analytical”.

Technical University of Munich professor Claudia Peus suggested that instead of removing such words from openings, the advertisements should be balanced by words women found appealing, like “dedicated”, “responsible”, “conscientious” and “sociable”.

“In most cases, it doesn't make sense to simply leave out all of the male-sounding phrases,” she says. “But without a profile featuring at least balanced wording, organizations are robbing themselves of the chance of attracting good female applicants. And that's because the stereotypes endure almost unchanged in spite of all of the societal transformation we have experienced.”

You might also like:
A Macy’s hiring manager made a thoughtless comment and America is freaking out
Hot topic: Still the 1940s? Sexism in the workplace
In Silicon Valley, this is normal