Diversity may be on the agenda says Sander van ‘t Noordende – but what is your company actually doing about it? 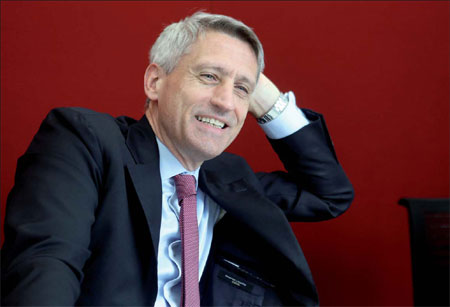 Acc
enture Products’ openly gay CEO has stepped forward to say the world of business is lacking in LGBT leaders – and you need to do something about it.

“Diversity and integration has progressed a lot in companies,” acknowledged van ‘t Noordende, “but there is a lot more to be done in LGBT communities.”

In October of last year, Apple’s head honcho Tim Cook became the first openly homosexual CEO of a Fortune 500 company. While many more Fortune 500 CEOs are said to privately identify as gay, none have come forward into the public sphere.

But why? More and more organizations are recognizing the importance of diversity and integration – it is, after all, good for business. “It is critical that you have a diverse workforce to understand the people who are using your service or product," explained van ‘t Noordende. "You need to stand in the shoes of your consumer,”

Well – while companies may claim to champion diversity, it actually “requires a far deeper level of inclusion” to become a “true ally for gay workers,” says Ernst & Young’s Beth Brooke-Marciniak.

“Some people are more than willing to put the rainbow mug on their desk,” she said in an interview, “but if someone says something in a meeting [that is homophobic], are they willing to speak up and be proactive and take action?”

Stamping out that sort of behaviour is the only way a company can truly profess to being all-inclusive, concluded Brooke-Marciniak.

And the problem doesn’t just exist in the c-suites of global corps but extends even to the ice-rinks of local communities. Recently, a gay hockey player admitted going “back in the closet” to become a coach.

Nora Cothren was an openly lesbian hockey player at university but after graduation she stepped up into a leadership position at a local non-profit. Here, she felt the need to be more furtive with her sexuality.

What is it about leadership roles that push people to hide their true identity?   Share your thoughts below.