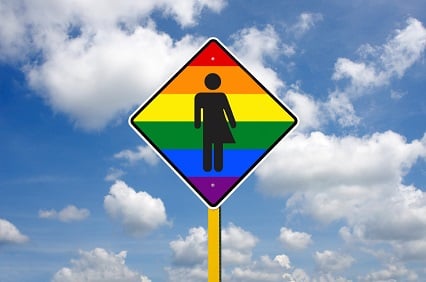 Are
you gay? The question isn’t taboo in the workplace anymore, for better or worse.
JPMorgan Chase & Co.’s human resources department is asking employees for the first time this year if they’d like to disclose their sexual orientation or gender identity. Companies including Facebook Inc., Deutsche Bank AG, IBM Corp. and AT&T Inc. also collect the data. By one measure, nearly half of the largest U.S. businesses -- under pressure to be inclusive as they compete for talent -- seek to gather information on who on the payroll is homosexual, bisexual or transgender so better benefit plans can be designed and managers can consider diversity enhancing promotions.

That may be true, but there’s enough peril that Chevron Corp. decided not to pose the question after a review identified data-security risks. Many that have studied the issue opted not to proceed, says Michelle Phillips, a lawyer with Jackson Lewis in White Plains, New York, who advises companies on employment law. Phillips says one worry is that a rogue employee might leak the information about a colleague to do him or her harm.
‘Totally Contrary’

There are a host of concerns -- including that it’s legal in 28 states, from Montana to Virginia, to discriminate against anyone who isn’t heterosexual. The issue is more urgent for people who work in or travel for work to the more than 76 countries where homosexuality is a crime. Companies are careful: American Express Co., which has been collecting sexual-orientation specifics in the U.S. for 10 years, is adding a question about gender identity only in countries where that’s legal, says Chris Meyrick, the chief diversity officer. Businesses that do ask the questions make it clear it’s voluntary to answer.

For former Ford Motor Co. Chief Financial Officer Allan Gilmour, who came out as gay in the 90s after twice being passed over for chief executive officer, it’s a pleasant surprise that employers are interested. “I never would guessed 20 years ago that questions of this kind would be asked,” he says. Back then, it was best to operate as though “this is nobody’s business except mine.”

Tom Barefoot, a strategic planning manager and senior vice president at  Wells Fargo & Co. in Charlotte, North Carolina, was one of the employees who encouraged the bank to adopt the self-identify policy in 2011. “When I finally clicked that one field on my sexual orientation, it was just like time had stopped,” he says. “I’m actually putting into our HR system that I’m gay? It felt really good.”

JPMorgan began posing the question in 2007 in anonymous surveys, and LGBT workers approached management about making it part of the human resources system. They wanted “to make themselves visible,” says Therese Bechet Blake, head of diversity for the corporate sector. But at EY, “there was some outrage” when after five years of the anonymous approach the consulting firm in 2014 put the query on human resources paperwork, says Chris Crespo, the inclusiveness director.

The most concerned were those who travel to countries where their lifestyle is a crime, she says. “There were very mixed feelings.”

Michael Elliott, an executive director in Dallas for EY’s consulting practice, says his initial worry was that “we didn’t make people feel like we were forcing them out.” And Elliot says that when he checked the not-straight box last year it was anti-climactic.

Few Objections
“It totally amazes me that the mindset has started to shift,” he says. “As little as 10 years ago, at smaller companies, you could either be easily fired or they were following the military idea of don’t ask, don’t tell.”

About 2.1 percent of EY workers reported being LGBT in the anonymous surveys. The HR data collected is too new for comparison, Crespo says, though EY estimates 2.1 is half the actual percentage. At EY and many other companies, she says, about 4 percent of people prefer not to answer, saying they don’t trust the question or consider it inappropriate.
“Voluntary self-identification is something that seems innocuous at first blush, and generally could be a good idea, but it’s actually much more complicated,” says Phillips, the lawyer. “No question, everything being equal, it’s better to collect than not collect. The problem is that everything isn’t equal.”