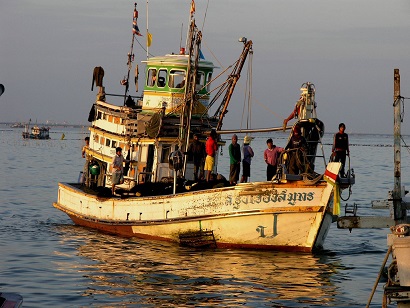 Glo
bal food giant Nestlé had admitted slavery and coercion is used in catching and processing some of the fish that ends up it its supply chain, the Associated Press reports.

The disclosure comes from the company itself as it concludes its year-long internal investigation – the study found that virtually all U.S. and European companies sourcing seafood from Thailand are exposed to the same risks of abuse in their supply chains.

The impoverished migrant workers originate from Thailand’s much poorer neighbours in Myanmar and Cambodia – brokers illegally charge them job-finding fees and trap them into working on fishing vessels, at ports, and on seafood farms while they pay back more money than they ever earn themselves.

"Sometimes, the net is too heavy and workers get pulled into the water and just disappear. When someone dies, he gets thrown into the water," one Burmese worker told the non-profit organization Verité, commissioned by Nestle.

"I have been working on this boat for 10 years. I have no savings. I am barely surviving," said another. "Life is very difficult here."

According to the Associated Press, Nestlé plans to post the reports online, alongside a detailed yearlong solution strategy throughout 2016 as part of ongoing efforts to protect workers.

It has promised to impose new requirements on all potential suppliers and train boat owners and captains about human rights, possibly with a demonstration vessel and rewards for altering their practices.

It also plans to bring in outside auditors and assign a high-level Nestle manager to make sure change is underway.

"As we've said consistently, forced labour and human rights abuses have no place in our supply chain," Magdi Batato, Nestlé's executive vice-president in charge of operations, said in a written statement.

"Nestlé believes that by working with suppliers we can make a positive difference to the sourcing of ingredients,” he added.

Why Canadian women say “fear” is holding them back

How to train staff (without them even realizing)