Lighter side: Why working remotely sucks 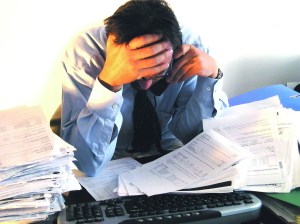 an style="line-height: 20.7999992370605px;">Apparently, working from home isn’t all it’s cracked up to be.   In fact, “there are a few reasons why being a remote worker sucks,” says Microsoft employee Scott Hanselman, who has worked from home for more than half a decade.   “It's really hard to be remote; I propose that most remote workers work at least as hard, if not more so, than their local counterparts. This is fueled in no small part by guilt and fear,” he said.   The latter kicks off his list of reasons why working remotely isn’t the fun and flexible party those rattling about in office jobs may think:   1. You feel guilty “We do feel guilty working at home. We assume you all think we're just hanging out without pants on, or we're just at the mall tweeting,” he said.   2. You work long hours Owing to point number one, many remote workers tend to overcompensate by working later, after kids are in bed and on weekends.   3. You get forgotten  Occasionally, Scott feels he becomes “the invisible guy in the meeting”. During a recently meeting, the webcam wouldn’t work and Scott was muted. “I was like ‘Hey, guys? It's me... Scott... I'd like to get you up-to-date on what I'm working on... Guys?’”   4. You have to prove yourself that little bit more Remote workers need to make it easy for those who work in the office to answer the question, ‘What is that person working on?’ “This is somewhat of a double standard, since they may have no idea what the person in the next office is working on,” Scott says. “But that woman shows up every day, so she must be productive, right?”   Do you think employees who work from home have to prove their output more than those who work in-house?