Lighter side: Top 10 terrifying tales of a recruiter 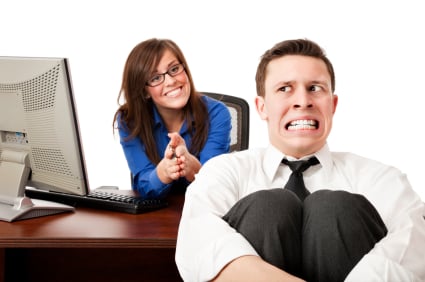 Fin
ding the right candidate can be a nightmare for any HR professional and even world class recruiters have a few frightening tales to tell. Here, industry expert Benjamin Rippey shared his ten most memorable stories from the halls of Korn Ferry.

No. 10 – The job-seeker umbilical cord
There are things to bring to an interview – a stellar resume, stories that showcase your expertise. Then there are things to leave home—like your mother. The candidate who had Mom wait in the lobby during the interview obviously didn’t get that memo.

No. 9 – Little Johnny’s Veto
Major career moves do impact the family but with an offer in hand, a candidate told a recruiter, “I need to discuss this with my son” (a conversation that, by the way, should have occurred before this point). Turns out 8-year-old Johnny said no.

No. 8 – Rambling on…and on…
A candidate, brought in for a 30-minute interview, talked nonstop for 20 minutes on the first question, ignoring the subtle signs (interviewers shifting in their chairs) and then also missed the more blatant signals (interviewers looking at their watches) to wrap up. At the end of the filibuster, the candidate said, “Oh, wait, I forgot what my point was.”

No. 7 – Treating a receptionist poorly
You won’t believe the number of jobs that are killed because of rudeness at receptionist. And if you do think the interviewer was inconsiderate or difficult, don’t say so on your cell phone as you are having your parking validated by the receptionist.

No. 6 – No Filter
One candidate who had a glass eye enthusiastically offered an impromptu show and tell – popping his glass eye out of its socket and showing it to his potential employer. Or the candidate who, over a breakfast interview, ate all of his pancakes- with this hands. The point is obvious: think before you act.

No. 5 – What I meant to say…
Everything you say in an interview makes an impression—good or bad. Woe to the candidate, who while interviewing for a job with Pepsi, said he was a bit parched … and asked for a Coke. Or another candidate up for a job at Yahoo!, who was stumped by a question and said definitively, “I’ll Google that one.” And then there was the candidate who met with the CEO of a large fast-food chain, who at the close of what had been a great interview asked, “You don’t really eat this stuff, do you?”

No. 4 – Wardrobe malfunction
You’d think smart, capable people would know enough to put their pants on. Not so with the guy who, during a video interview, had to get up quickly to shut the door when his dog started barking. Waist up, he was all Brooks Brothers; waist down, only boxers.

Or, the person, wearing the Canali suit he bought 20 pounds ago, who blew out the back of his slacks as he sat down in the reception area. He promptly asked the receptionist for a stapler and went into a side office, where an unmistakable “click…click…click…” was heard, as he performed sewing triage.

No. 3 – Dressing for failure
Clothing failures abound! There’s the candidate who showed up in an outfit meant for “Dancing with the Stars,” not “Auditing with the Accountants.” Or the person who, looking to calm his nerves, ordered a Bloody Mary on his inbound flight and spilled it all over himself during turbulence.

No. 2 – Wasting people’s time
After two months of multiple interviews with senior management in different cities, a senior executive shook hands on the deal. On the first day of work though, he was a no-show. When the CEO finally reached him, he was on en-route to an ashram in Nepal- the just didn’t think he was “evolved” enough to take the position.

No. 1 - Resume “creativity”
If you didn’t really go to Harvard, if your degree is in interpretive dance and not finance, or if that six months of community service you brag about on your resume was actually time served in prison (yes, these are real stories) people will find out. And if you think it’s hilarious to post your mug shot, after the bachelor party ended with a drunken disorderly, on Facebook, know that the “information highway” runs in all directions.