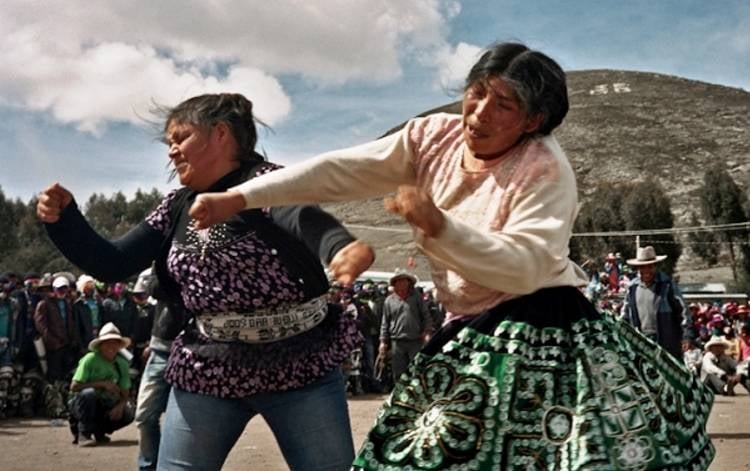 On 25th December, communities nestled high in the Peruvian mountains of the Andes will take part in a long-held tradition known as “Takanakuy”, which lets residents fight with anyone they like – even their boss.

“The basic idea of Takanakuy is that people build up their grievances all year and instead of getting into fights they save it and on Christmas everyone gets into a big fight,” says documentary maker Thomas Morton.

Community members choose to adopt one of four symbolic identities and dress accordingly but, according to Morton, everyone has to wear one thing – a traditional Peruvian ski mask.

“This dates back to the days when Takanakuy was the one time of year you could beat up your boss,” explains Morton. “Disguising your identity was pretty essential.”

Victor Laime Mantilla, a teacher in the participating village of Santo Tomás said; “Takanakuy is a space where people are able to resolve their conflicts. Be it for romantic reasons, territorial conflicts, friendship problems or family to family situations. They will solve it in there.”

Anyone who wants to settle a score during Takanakuy calls out the person they have a problem with and then they proceed to the centre of an official circle to fight. The entire village participates – men, women and children – and every bout begins and ends with a hug which certainly seems more amicable than many office disputes.

More like this:
Are pranks and grudges putting your company at risk?
Does a “kick in the butt” excuse a punch in the mouth?
Texan employee firing turns deadly after screwdriver – pocket knife showdown