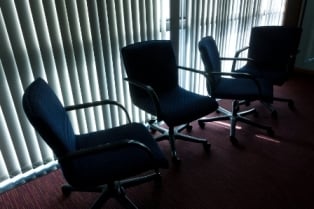 Uns
ettling CCTV footage from one UK office appears to show the actions of a workplace poltergeist as chairs fly across the room and computer screens suddenly come to life in the dead of night.

The video also captures the rattling of door handles, shadows passing over walls and filing cabinet draws being flung open before having their contents thrown out.

The disturbing video, which has garnered widespread attention on social media, can be seen below:

However, one expert ghost hunter says the video – which was taken at Castlefield House in the city of Manchester, may not be quite what it seems.

“I did some digging into it and there are a number of ways that you can tell it isn't real,” says Scott Machinnon, who runs Phoenix Paranormal Investigation.

"Some of the scenes have clearly been edited and there's a few different signifiers of it that wouldn't stand out to the untrained eye,” he added. “But it is really well done."

The ghost guru has been working in the field for 20 years – he leads a team of psychics that, he says, focus more on the scientific aspects of the paranormal to try and discover the reason behind any unexplained occurrences or activity.