Employees at IBM once had to sing for their supper – literally. The company published a book of songs praising the company and its founder in the 1920s, a concept which would baffle modern workers. 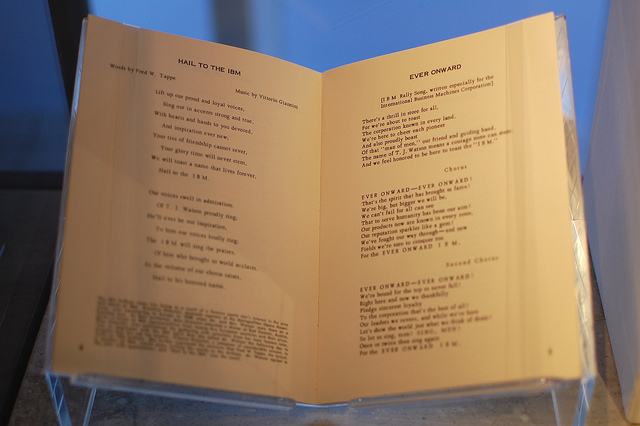 an style="line-height: 20.7999992370605px;">There’s a school of thought that encouraging employees to sing together has health and creativity benefits so maybe IBM was on the right track when it published Songs of IBM in 1937. The collection of corporate lyrics, sung to popular melodies, was first published in 1927 on the order of the company’s founder, Thomas Watson Sr, ARS Technica reported. The 1937 edition features 54 pages of songs dedicated to the company and Watson’s greatness. The opening passage of the book reads: “For 37 years, the gatherings and conventions of our IBM workers have expressed in happy songs the fine spirit of loyal cooperation and good fellowship which has promoted the signal success of our great IBM Corporation in its truly International Service for the betterment and benefit of mankind.” One song describes Watson as “so big and so square and so true” and promises that workers will “follow and serve with you forever”. Can you imagine singing those words about your CEO or managing director? Or worse, singing them TO your CEO? The book contains songs praising different divisions and corporate officers and even one about the company’s “office girls” and their sweet smiles. NetworkWorld reported that Watson collected songs written by employees about the company to create the book as a way of motivating workers during the tough Depression-era economic conditions. Watson’s son, TJ Watson Jr, wrote a book called Father Son & Co: My Life at IBM and Beyond, in which he recalled singing the songs at the company’s training school. “Everything about the school was meant to inspire loyalty, enthusiasm and high ideals, which IBM held out as the way to achieve success. In class the first thing we did each morning was to stand up and sing IBM songs…There were dozens of songs in praise of Dad or other executives, set to tunes everybody knew.” The era of employee singing at IBM finished in the 1950s, but the company had a symphony orchestra until 2001. How would you feel about singing songs praising your company and bosses?