Bosses say she’s definitely got an interview after the Alice in Wonderland-esque application caught their attention. 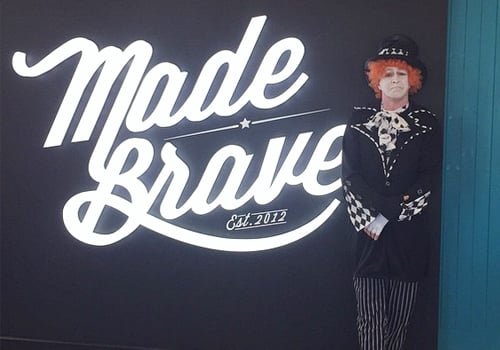 One
creative job seeker definitely caught the attention of bosses after she roped her acquiescent husband in to help deliver an Alice-in-Wonderland-inspired application.

Making the most of her Scottish surname, MacHatter, the Glasgow-based hopeful sent her obedient spouse into Made Brave – a digital creative agency.

Mr MacHatter was – of course – dressed as none other than the Mad Hatter himself.
Her obliging other half theatrically commanded the attention of the entire office before announcing that he was there to “deliver a CV on behalf of Mrs MacHatter.”

The cover letter, safely enclosed inside a glass bottle, read: “There is no great genius, without a touch of madness.”

But Mrs MacHatters unusual application will likely come up against some stiff competition because the agency actively encourages would-be employees to apply in the most creative way possible.

“We get people sending us jigsaws and we get a piece every day and that becomes their CV,” revealed founder Andrew Dobbie. “We get a lot of cakes and videos sent in. One guy sent us in a video of him as the Lion King – I think he’d torn a stuffed bear apart.”

So was Mr MacHatter’s fancy-dress escapade in vain? According to Dobbie, it’s too early to tell.

“We don’t know if she’s got the job yet but we’ll give her the interview,” he said.