If people are prepared to work hard, nothing can get in the way of them achieving their aim, suggests a new study 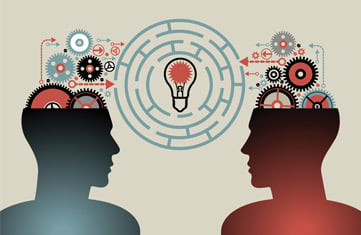 As
long as we put the work in, we are all capable of re-tuning our brains, indicates new research from scientists at the Jagiellonian University in Poland.

The study concluded that learning a complex task over a long period can challenge the brain and break the barriers that were long thought to be fixed.

This is in contrast to traditional biology lessons which teach that the brain is divided into separate areas, each of which processes a specific sense. Indeed, the findings to be published in eLife, show we can supercharge it to be more flexible.

"Our findings tear up that view, showing we can establish new connections if we undertake a complex enough task and are given long enough to learn it.”

The findings could have implications for our ability to bend different sections of the brain to our will by learning other demanding skills. This could include playing a musical instrument or learning to drive.

The flexibility occurs because the brain overcomes the normal division of labour and establishes new connections to boost its power.

The study involved 29 volunteers who were taught to read Braille while blindfolded over a period of nine months. This resulted in them achieving reading speeds of up to 17 words per minute.

Before and after the course, they took part in a functional Magnetic Resonance Imaging (fMRI) experiment to test the impact of their learning on regions of the brain.

This revealed that following the course, areas of the visual cortex, particularly the Visual Word Form Area, were activated and that connections with the tactile cortex were established.

"We are all capable of retuning our brains if we're prepared to put the work in,” added Szwed.

The findings call for a reassessment of our view of the functional organisation of the human brain, which is more flexible than the brains of other primates.

"The extra flexibility that we have uncovered might be one those features that made us human, and allowed us to create a sophisticated culture, with pianos and Braille alphabet," said Szwed.