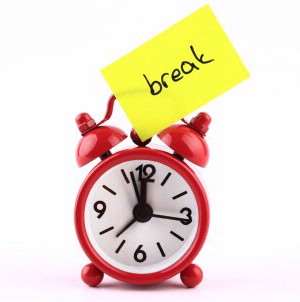 Sho
uld people work less to get more done? It may sound counter-intuitive but that’s the word from a recent study into workplace productivity.

The results come down to “psychological energy”, according to co-author John Trougakos.

“All efforts to control behavior, to perform and to focus draw on that pool of psychological energy. Once that energy source is depleted, we become less effective at everything that we do,” he said.

Another recent study from Draugiem Group finds that the most productive employees are not those who work more hours, instead it seems to be those who take a break every hour. Taking a 17 minute break every 52 minutes seemed to be the most effective way to boost productivity.

Most people can only focus on one task for a maximum of two hours, so instead of setting daily tasks, the most productive people set tasks in one hour or 90 minute blocks.

It’s about working smarter, instead of working more. By managing energy instead of managing time, each worker can get more done with the time they have, ensuring they are rested and refreshed when it’s time to focus again.

Putting it in practice:

Split the day into smaller pieces
Eight hours sounds like a long time, but it can go by fast. By splitting the day into five 90 minute blocks or seven one hour blocks employees can better prioritize tasks, and see what they’ve achieved throughout the day.

Set shorter deadlines
Instead of thinking a task will take three days, say it will take three one-hour periods. You can do this in the course of one day, or spread over a few days, but by encouraging workers to recognize the real time that goes into a task you will make the most of each day.

Plan to rest
Those who took their rest time to go for a walk, get something to eat, or otherwise get away from their desks were more productive than workers who stayed at their desks and browsed the internet. Getting away from the workspace will ensure employees are more rested, and more creative when they come back.

Zero notifications
This could be a tough one for those who think their emails are always urgent, but turning off notifications or setting your emails to update just once an hour means better focus and efficiency. Encourage employees to try different settings to find what works better for them.