If you’re wondering how to increase staff engagement and productivity, the answer is probably right in front of you: the office itself. Three key trends will dominate workspace design in 2014 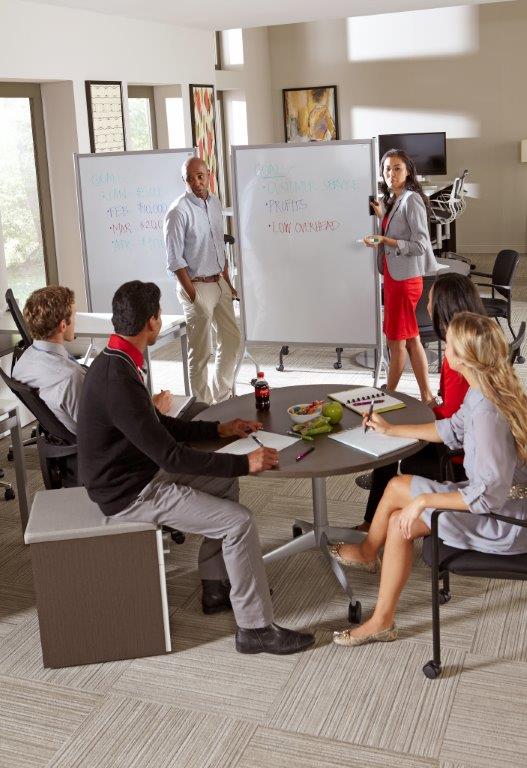 Wit
h increasing pressure on the bottom line and a world of other priorities, office layouts are often the last thing on your mind when you’re in HR. But if employee engagement is a concern, the office is worth a second, very careful look. Just one quarter of American workers report satisfaction with their offices’ balance between facilitating collaboration and individual, focused work, according to a Gensler survey. Many workplaces haven’t kept pace with the needs of their most valuable employees, the survey said.

“In the last five years, I’ve seen more changes … than I’ve had in the 15 years in front of that,” said Ann Sennewald, vice president of merchandising at CORT, which deals with the office needs of companies around the world.

“It’s not unusual to have offices that are 6x6 (feet) now, and 8x8 used to be the standard,” she said. “It’s not being perceived as a negative when you’re giving people other options of ways to work.”

As collaboration comes to the fore, three key trends will prevail this year:

Greater autonomy for employees The Gensler survey found that at the most productive workplaces, employees had autonomy to choose their work space based on the task or project at hand. Don’t be afraid to offer a variety of workstations: productivity will rise as employees choose the desk most productive for the task at hand, while worker satisfaction benefits too. It’s for this reason that standing desks have become increasingly popular. In fact, 42% of US employees are interested in adopting a standing desk, and 53% believe sitting all day is what has the most negative impact on their health, according to Keas, which runs employee engagement programs.

Balancing focus and collaboration If the ability to focus is sacrificed at the altar of collaborative offices, everyone loses. In 2003, Facilities journal reported 70% of all offices already had an open design. The average square footage per office worker dropped from 225 in 2010 to 176 in 2012, and Cornet Global predicted it could drop as low as 100 square feet per worker in 2017. So it’s no wonder that Gensler found 53% of employees are disturbed by others when trying to focus. Furthermore, 69% were dissatisfied with noise levels at their primary workspaces. That’s not to say that there isn’t merit in the open office; rather, providing silent, separated spaces for quiet work is often also necessary.

Using data to analyze the needs of your offices Data that indicates exactly how often workspaces are being used, and by how many people, has been used for some time now to determine how to arrange office space. But with the rise and rise of dedicated HR analytics roles, companies will have more resources to analyze space utilization data than ever before. Technology also plays a role: wireless sensors are now available to attach to chairs and report usage, collecting data far more accurate than manual observation.