One Hyrdro One employee’s mom won’t be laughing as her son suggested in a controversial on-camera interview, after it led to him being summarily fired. 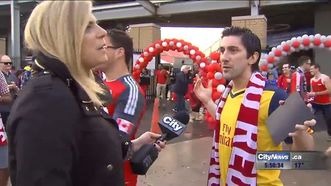 Hyd
ro One’s code of conduct has been brought to bear on one employee, after he was confronted on camera on Sunday by a CityNews reporter over harassing language.

The CityNews reporter, Shauna Hunt, was recording a live TV stand-up outside of the Toronto FC game on Sunday, surrounded by boisterous fans of the team.

However, the scene turned into a HR incident for energy company Hydro One when a group of men shouted crudely in the background: “F--- her right in the p---y”.

When confronted by Hunt on camera, the Hyrdo One employee, now identified as Shawn Simoes, defended the behaviour as being “F—king hilarious”.

Hyrdo One’s management was quick to move against the assistant network management engineer, who was making $106,510.50 a year at the company.

“Regarding the incident at the Toronto FC game between a (CityNews) reporter and fans, Hydro One is taking steps to terminate the employee involved for violating our Code of Conduct,” said Hyrdo One’s corporate affairs director Daffyd Roderick.

“Respect for all people is engrained in the Code of Conduct and in our Core Values and we are committed to a work environment where discrimination or harassment of any type is met with zero tolerance,” Roderick told the The Star.

Hunt confronted the men on camera, asking a number of individuals to justify why they were being vulgar by shouting “disrespectful and degrading” comments.

Hunt explained that the widespread trend among men meant she was getting the phrase “FHRITP” hurled at her up to ten times a day while she was working.

Simoes responded by saying it was “absolutely f—king hilarious”, and that he didn’t care what Hunt said, because he respected others who had done it in the past.

When Hunt asked Simoes directly what his mom would think about him using the language, he said: “Oh, my mom would die laughing eventually”.

All of the men seemed oblivious of how their vulgarity might be interpreted by the general public – or their employers, should they view the footage.

The Star reports that Maple Leaf Sports and Entertainment said the Toronto FC fans involved in the incident will be banned for “at least” a year.

The vulgar trend has been playing out across Canada and the US for more than a year, has been condemned by two Canadian police forces and Ontario's premier.

Premier Kathleen Wynne tweeted against the incident at hashtag #ItsNeverOkay, saying sexual harassment – whether caught on camera or not – was no joke.