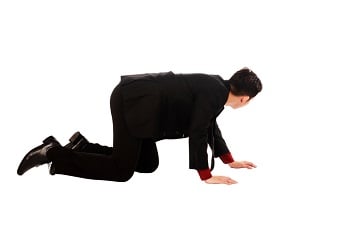 A c
ompany in China is facing harsh criticism after it was revealed bosses had forced employees to crawl around a 23-acre lake for failing to hit sales targets.

Images of the incident were uploaded to Weibo – the Chinese equivalent of Twitter – and showed workers with torn clothes struggling to complete a lap around Ruyi Lake.

The substantially-sized lagoon is located in the central business district of Zhengzhou and punished employees can be seen crawling past shocked passers-by. One man is even pictured crying, clearly overcome by the company’s bizarre physical – and psychological – punishment.

To make matters worse, the incident took places during a week-long national holiday, when most people aren’t required to work and often use the time to make long-distance trips.

It’s also believed the organization arranged for a “supervisor” to ensure no employees could give up.

One web user slammed the practice as “inhumane” and another asked if the cruel boss was a psychopath.

While the incident might sound outrageous to most HR professionals, humiliation tactics have been employed by North American organizations too.

Earlier this year, Target faced international criticism after a former California employee committed suicide – his grieving mother claimed her son took his life because bosses had publicly humiliated him.

Graham Gentles – a 22-year-old with Asperger’s Syndrome – was accused of theft, handcuffed then walked through the Target store in front of colleagues and customers.

Police officers took the “shocked, confused and mortified,” young man to the police station but Gentles was never charged. Three days later, he ended his own life.

The media attention that followed Gentles’ tragic suicide prompted numerous other employees to reveal their own similar experiences with many insisting they’d never knowingly broken any rules or laws.

Why MI6 recruiters would reject James Bond
Beastly bosses a living nightmare for many
Why should HR be brand aware?