The bank has apologised after the abhorrent video – filmed during a team building exercise – emerged online. 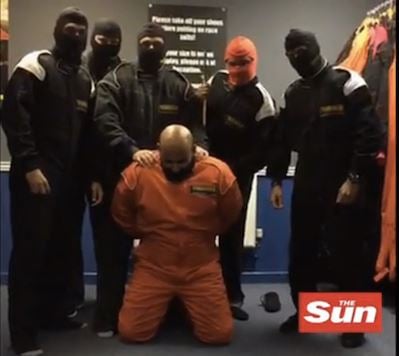 The eight-second clip – taken during a team building exercise at a go-karting track – shows five of the men standing in black jumpsuits and balaclavas while a fifth kneels at their feet in an orange overall.

Kidnapped British aid workers Alan Henning and David Haines were both wearing orange jumpsuits when they were executed by the extremist organization.

One of the workers crassly posed as an Islamic militant holds a coat hanger in place of a knife while another shouts “Alluha Akbar” – Arabic for “God is great.”

The men are believed to be from the legal division of the bank’s Birmingham branch and all involved have since been dismissed.

“Once we saw this abhorrent video, we took the decision to sack the individuals involved,” the bank said in a statement. “We apologise for any offence.”

Labour and employment lawyer Heather Hettiarachchi told HRM that the bank is well within its rights to dismiss the offending employees.

“Normally it might not be as clear cut but this is way over the line,” she said, citing the seriousness of the matter. “It’s in very poor taste and shows a complete lack of judgement.”

Vancouver-based Hettiarachchi added that social media cases like this – albeit less extreme – are becoming increasingly common.

Of course prevention is better than cure and according to Hettiarachchi, increased communication is the best way to keep employees from making major social media mistakes.

“Warn employees to be mindful of what they post and what they say,” she advises.  “Remind them that how they behave and communicate outside of the office can significantly affect on the employer’s public image and reputation.”