One high level exec has come under fire for apparently contradicting the company mission of encouraging women into the world of tech. 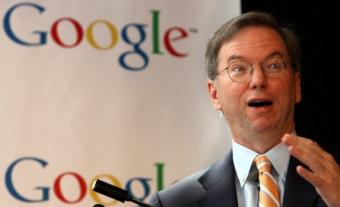 Eri
c Schmidt, executive chairman at Google, was reprimanded by the company’s diversity manager at the South by South West (SXSW) music and technology festival in Texas for “manterrupting” another delegate.

The tech giant’s former chief executive was speaking on a panel with Megan Smith, the US government’s chief technology officer, when a member of the audience confronted him for frequently interrupting her during the discussion on racial and gender diversity.

The audience member in question was Schmidt’s colleague at Google Judith Williams, head of global diversity and talent programs. Williams runs workshops at Google to educate staff about workplace prejudice and discrimination.

According to The Wall Street Journal, at one point Schmidt “opined on which of two questions Smith should respond to” and “interjected mid-sentence with thoughts on Raspberry Pi”.

However, before the incident, Schmidt had referred to the lack of women pursuing degrees in computer science a “tragedy”.

The Wall Street Journal reported that he did not respond to Williams’ accusations.

Earlier this year, Jessica Bennett wrote in Time magazine about “manterrupting”: the “unnecessary interruption of a woman by a man”, which many have aligned with Schmidt’s behaviour at the event.

Williams told the panel’s audience that ideas she puts forward at meetings often get ignored – only to have a male colleague make the same suggestion afterwards, a trend which Bennett dubbed “bropropriating”.

Diversity figures at Google show that its global workforce is 70% male.

But Schmidt’s actions seemingly conflict with Google’s mission to increase gender diversity in its workforce.

“All of our efforts, including going public with these numbers, are designed to help us recruit and develop the world’s most talented and diverse people,” Google’s website says.

The company’s Equal Employment Opportunity report detailed that just three of its 36 executives and senior managers are women.

In an effort to encourage employment for women at Google, the organisation has established ‘[email protected]’, an employee resource group made up of over 4,000 female employees committed to providing networking and mentoring opportunities, professional development, and a sense of community to women in 27 countries.