Tattoos are becoming increasingly common, but for one company, an employee’s inked foot was a step too far. 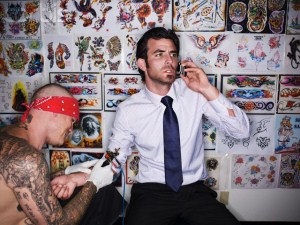 Pre
dictions suggest that about 20% of adults in Australia, the US and the UK have at least one tattoo, which makes it likely that a significant number of your employees are sporting ink somewhere on their bodies.

It appears that both the popularity and acceptance of body art is on the rise, yet one UK executive found herself out of a job because of a butterfly tattoo on her foot.

HR Grapevine reported that former Salisbury FM executive Jo Perkins had her contract terminated after she had trouble covering up her tattoo – which she said she already had when she began working for the company and before it instituted a “no tattoos on show” rule.

Perkins said she was not dealing with the public in her role and felt that covering the tattoo with a sock or a plaster would draw more attention to it.

“The only way to cover it would be to wear a sock. I’m a businesswoman and I wear smart dresses to work, so that would look stupid. I suggested covering it with a sticking plaster, but thought that would look unprofessional.”

So how can you deal with tattoos in the workplace?

Athena Koelmeyer, managing director of Workplace Law, said that employers could implement a policy requiring tattoos to be covered as part of their usual dress code or uniform policy.

“The trick will be in the enforcement of the policy – for example, an employer who introduces a ‘no visible tattoo policy after having many tattooed employees for many years may have some difficulty in enforcing the policy in a short sleeve/singlet top environment.

“The only possible exception here would be in the case of cultural tattoos (e.g. the Maori facial tattoos), where it would be inappropriate for employers to not make allowances for religious or cultural dress/tattoo requirements.”

Have you ever dismissed anyone because of their tattoos?